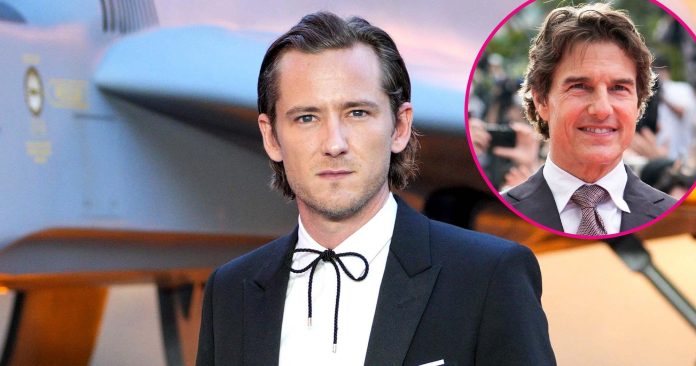 Feeling the need — for taking notes. Lewis Pullman and his costars underwent grueling training in order to pull off their Top Gun: Maverick fighter pilot duties — and it couldn’t be done without Tom Cruise.

“I had to just transform into a sponge and just absorb, absorb, absorb because it was a new lesson every day. I mean, he is a Titan,” Pullman, 29, exclusively told Us Weekly of Cruise, 59, on Friday, June 24. “I’ve never seen anyone approach filmmaking the way he does, and I’ve also never seen someone that far into their career who still has such drive, has such curiosity, has such passion has such a reluctance to settle, is always trying to make even the smallest scenes better. And he’s so invested in learning about, I mean, he’s already learned about it, but in every asset of filmmaking, he seems to have a vast understanding of every particle that goes into making a good movie that everyone around the world can relate to. And so that was just incredible, incredible to watch.”

The Outer Range actor plays Lt. Robert ”Bob” Floyd in the acclaimed sequel to 1986’s Top Gun. Since its May 27 debut, its already soared past the $1 billion mark at the box office. Cruise returned to reprise his role as Captain Pete “Maverick” Mitchell and insisted that the film needed to be seen in theaters. (It was initially delayed due to the rise in coronavirus cases.)

“We had to do all this swim training in order to get certified in order to get into the plane that wasn’t even in the movie,” Pullman recalled, laughing. “But despite all that, despite the challenges, Tom really set up this course himself, he designed this training, this training program himself. And so who better to do that than Tom Cruise? Who knows exactly what an actor is gonna need from the ground up to get to be able to perform at that level, and that training two and a half months, what that had to look like. And so it really, he kind of gave us this really gradual program and in such a way that it felt manageable and in these kind of like bite-size digestive portions where it was like, ‘OK, I think I can do this. I think this is absolutely insane, but I think I can do it.’”

Tom Cruise Through the Years

Going through “hurdle after hurdle” clearly paid off. On actual production days, accuracy with timing and light also played a significant role.

“Learning how to handle G’s is one thing, learning how to handle motion sickness is another thing. Learning how to kind of just be able to be really aware. And there’s a lot of stuff that you have to do on the day when you’re up there shooting,” Pullman explained to Us. “And so to kind of be able to handle all these different biological shifts and environmental shifts are going on and kind of like claustrophobia and you’re up in the air doing insane maneuvers while also trying to get a good performance, get what we needed for the story line, make sure that it was dynamic, make sure that the continuity worked, make sure that the sun was in the right place between two and three o’clock otherwise, the shadow of the camera [will be] on your face.”

Miles Teller Through the Years

Other newcomer pilots — Miles Teller, Glen Powell, Monica Barbaro and Jay Ellis — also needed to get prepared physically. Safe to say, the iconic football beach scene was one of the many reasons why. Pullman, however, kept his shirt on for a strategic reason.

“The whole cast was undergoing some serious battles of impulse to get ready for that scene. Everyone was working out like crazy. I was playing Bob, who’s a bit more of a library dweller. I was like, you know, I think it’ll just feel a little dissonant if Bob takes his shirt off and he is a little ripped. I also think Bob wouldn’t take his shirt off. I think that’s kind of maybe an uncomfortable thing for him to do. I think he’s a bit more of a kind of reserved, quiet guy. He kind of likes to watch how things play out before he really inserts himself into a situation,” he said. “And so I was one of the only people who really wasn’t hitting. I mean, I would go into the gym just out of camaraderie. Glen Powell infamously one time was doing some lateral flies and was whispering something to himself really intensely. And I was like, ‘Glen, what are you saying?’ He was like, ‘Montage’s last forever.’”

The line, of course, took on a life of its own. That was his mantra. And then everyone started to just chant that,” he recalled. “But it was a pretty fun scenario to be a part of.”

As for whether his costars may have been jealous he didn’t have to go as hard at the gym, he mused: “I mean, maybe. But then you see the scene and everyone’s like, ‘Yeah, it was worth it.’”

Mortal Shell Arrives on PS Plus Without The Right To Upgrade...