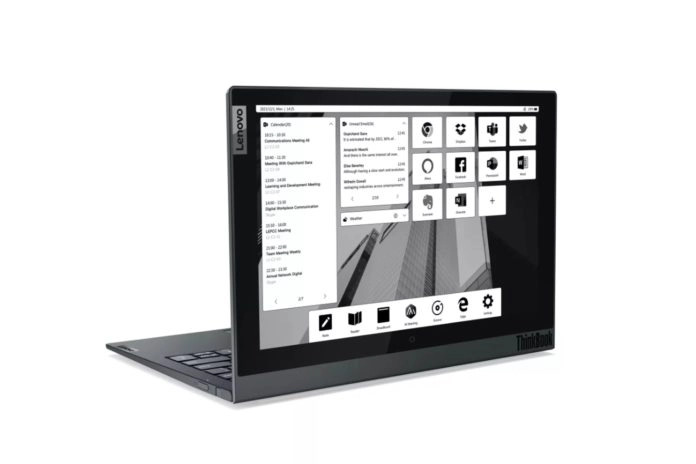 Lenovo continues to make its product, which we can describe as a “laptop with a Kindle on the cover”, into a more aesthetic work with the Lenovo ThinkBook Plus Gen 2. The 12-inch E Ink on the cover of this new product announced as part of CES 2021 comes with a higher refresh rate, higher resolution. And it comes with enhanced software that makes it easy to launch applications without opening the laptop.

The ThinkBook Plus, which was first shown at last year’s CES event, attracted attention with its built-in E Ink display on the cover that allows users to take notes, read e-books and view things like calendar information.

With the new model, the E Ink panel is further developed. The 12 inch, 2560 x 1600 pixel resolution panel supports multi-touch and works with a pop-up pen. For the main screen inside, the E Ink screen can be described as being replaced by a normal IPS screen. This display has a resolution of 2560 x 1600 while offering 400 nits of brightness and support for Dolby Vision.

The rest of the technical specs show that we have an adequate laptop: Intel’s 11th Gen Core processors, 16 GB LPDDR4x memory and up to 1 TB PCIe Gen 4 storage. The design has also been improved, with an overall sleeker look. However, these improvements result in a higher price. The product to be sold abroad in the first quarter of 2021 has a starting price of $ 1549.

In addition to the new E Ink-equipped ThinkBook, Lenovo announced three new products in the series. There’s the ThinkBook 13x, which starts at $ 1199 and is claimed to be one of the “thinnest 13-inch Intel Evo business laptops”. This is an effective ThinkBook Plus Gen 2 model, it just doesn’t have an E Ink screen on its cover.

Finally, there are a couple of AMD-powered options. First, the ThinkBook 14p Gen 2, which starts at $ 849, offers AMD’s next-generation Ryzen processors and features up to 32GB of RAM and 1TB of PCIe Gen 4 storage options. There are also two interesting display options: 2.2K 14-inch IPS panel and 2.8K 14-inch OLED.