The Indian market is very disputed, and Samsung itself was one year out of the top of sales because of the appeal of Xiaomi and its cheap intermediaries. She recently won the gold medal, but she cannot afford to rest for now.

The tablet segment, however, is led neither by the South Korean nor by this Chinese: it is Lenovo that bears this title, thanks to a commendable sales percentage, which in the second quarter of 2020 reached almost half of all tablets sold there: 48%.

The number represents a good growth compared to the second quarter of 2019, when the manufacturer held 32% of the market in this product segment. Samsung has also grown at an extremely decent pace: from 17% to 29%, but it is still a long way from Lenovo. 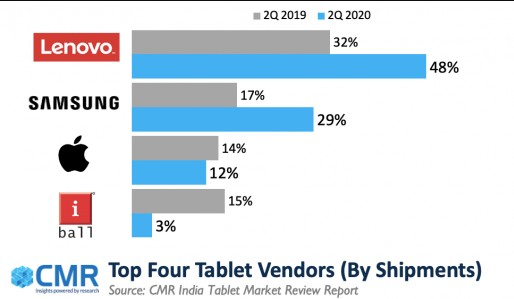 The data are from CyberMedia Research, which also reveals that devices with screens between 7 and 8 inches accounted for 35% of sales. 10-inch models stayed with the other 65%.

If on the one hand it is difficult to believe that Apple has such a small importance in the segment of tablets there, again it is worth remembering that the Indian scenario is extremely competitive and takes advantage of those who offer the lowest price. Despite the recognition that iPads have, they are nowhere near the most affordable tablets on the market whatsoever.

In the global scenario, however, the iPad is the leader with ease: in the second quarter of 2020, Apple was responsible for 38% of sales in this segment, Samsung for 18.7%, and Huawei only 12.7%.

Vehicle multimedia systems will get stronger