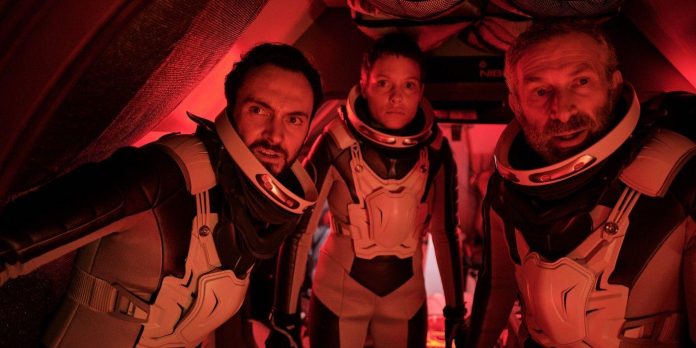 Leni Laurich is the director of Rubicon, a rich sci–fi chamber performance about the end of the world. Rubicon follows three astronauts—Hannah, Gavin and Dmitry—who observe the poisonous fog covering the earth from the relative safety of their space station. Soon, the crew must decide whether to stay in the safety of their ship or go back to earth in the hope of rescuing those who survived the disaster.

Screen Rant met with Laurich to discuss her film, including how she wrote five scripts to create the film, what it was like to shoot her first major feature film and how the tracks inspired the film.

Screen Rant: In addition to directing Rubicon, you also co-authored the story. Could you tell us a little bit about how the Rubicon went from the idea to what we saw in the final film?

Leni Laurich: That’s a long answer. In fact, it was a five-year process, where for the first three years we just wrote and received funding, which is also very, very difficult here in Austria. I mean, it’s a little easier for us because we don’t have to look for private investors or anything like that. We have such a financing system where there is, as it were, a budget from the taxpayer, and there is a jury, and they choose projects, and I think they were all very intrigued by something like this. It was new, it was doable, though expensive. I also think a woman doing science fiction was exactly what they were looking for. And it also had this thing about the balance between being an art and being a genre. It kind of ticked the boxes, so we got funding pretty quickly.

But you always need to know what you are writing for each funding institution. So I had to write four different scripts, and the fifth one was the one… But I think it’s OK. Then there was a very long process of preparation for filming, because, as I said, we didn’t have a lot of money. So we had to thoroughly prepare for the scenery and visual effects. So everything had to be really on top, because there was no second chance. Never.

We had a very beautiful shoot, it was just great. Because you planned it all out, but once you got there, the set is much bigger than you thought. I saw it in the blueprints, [but] it was crazy. And then there was a long second stage of post-production, because we didn’t have that much money. I could view 30 shots a day for several months — you were always working on one or two shots at a time. They should be super planned. And I also had to work very closely with artists, so it was really a lot of directing work.

This is your first feature film. What prompted you to tell this story for your major directorial debut? What led you to this idea?

Leni Laurich: I think that for me, as a director and a citizen, the class struggle in it most excites me right now. At the time I started, I was actually also very influenced by a lot of documentaries that I watched about how our planet is becoming more and more fucked up. And I was really depressed about it. I was really, really crying after watching Chasing Coral for about a week. All these real emotions [entered] into one film that I could make, because if you are shooting a film in Austria, and this is your first film, it may also be your last. You’ll never know. I mean, our small community, we don’t have much money. So I said, like, “Okay, I’m doing whatever I want.”

And I love science fiction. I always have. Since my ex-boyfriend was a visual effects artist, I worked a lot on visual effects myself. So I really knew what was possible and what wasn’t. So it’s like, “OK, I’m reading something that’s doable with the budget we have.” And if people like it, hooray, and if not, then fuck it. And I made a movie that I really like.

Was there anything that surprised you in the directing process of this film? It seems so huge in scale.

Leni Laurich: It is. And it just grew and grew and grew in the beginning, I actually thought it would be a very artistic metaphor, and I actually thought we were shooting at an old power plant because we have a nuclear power plant in Austria, [which] has never been used. So actually, I thought we were going to shoot there and it would be like a super pretentious farce.

And then, you know, we got production. They always said, “No, no, we can do this.” And it was becoming more and more real. And then we had all these insanely talented people who also made so much contribution. Like, for example, the production designer Johannes Mücke, who also worked with Roland Emmerich. And he really had a huge concept and ideas about how we could bring it to life.