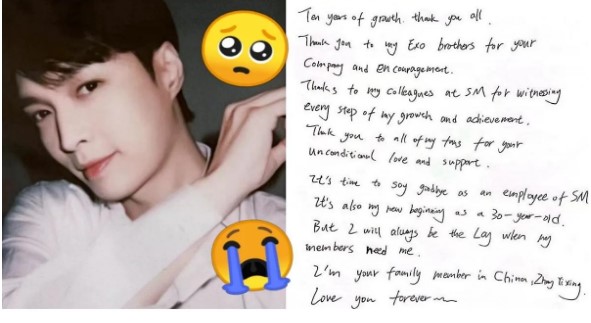 The tenth anniversary of EXO left a bittersweet taste in the mouth of fans, as one of the band members announced that he was leaving the company. EXO’s Lei informed fans in a letter that he would not renew his contract with SM Entertainment.

EXO’s Lei used his social media to inform EXO-L about news that not many people liked. The Chinese singer announced that he was ending his relationship with SM Entertainment, deciding not to renew the contract.

For many EXO fans, Lei’s absence for several years was very sad. Due to political problems between China and South Korea, Lei Zhang was forced to stay in China, where he began to build a career as a solo artist, producer and actor.

There have been several EXO comebacks in which he has appeared, and he has not promoted with the band. Nevertheless, he always maintained close relationships with the participants, sent messages, entered their lives and even met with them when their schedule allowed.

LAY SAYS GOODBYE TO SM AND EXO-L IN A LETTER

Through his Weibo and Instagram account, Lei Zhang shared a handwritten letter in English and Korean about his departure from SM Entertainment. In the letter, I express my gratitude to SM, his brothers from EXO and his fans for their company and support over the past 10 years.

It’s time to say goodbye to the SM employee. It’s also a new beginning for me at 30. But I will always Lay when my members need me. I am a member of your family in China, Zhang Yixing. I will always love you.

On the part of SM Entertainment, the company announced that the exclusive contract with Lei has ended. They are still discussing other ways to maintain a relationship with the Chinese singer.

After SM’s announcement, many fans suspect that although Lei does not belong to SM Entertainment, he may promote with EXO from time to time.

Song Joong Ki: What Is The Actor’s Official Instagram?

Professional chess mistakes in the series