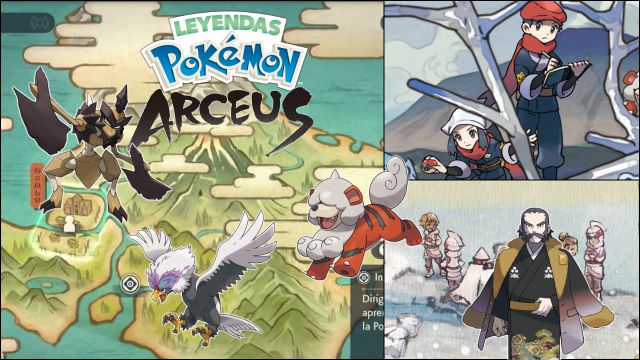 Pokémon: Hisui Zorua and his evolution, Hisui Zoroark, are the first Normal / Ghost type Pokémon in the history of the saga. The Pokémon Company has finally solved the latest mystery of Pokémon Legends: Arceus, the new title in the exclusive Nintendo Switch series. Players will have the opportunity to meet two ancient creatures, none other than Zorua of Hisui, as well as his evolved version, Zoroark of Hisui. Both are fifth generation Pokémon, but this time their appearance is different because they were raised in the region that in the future will be known as Sinnoh.

One of the most interesting novelties that for the first time in the saga we will see creatures that respond to the Normal / Ghost typology, so that both Zorua and Zoroark are able to use abilities of both classes. In the video, we observe how the human character enters a completely snowy location. He is at night and uses a flashlight to glimpse what is happening around him. “This place is … how to explain it?” He wonders as he enters a kind of grove under the starry sky. “It’s very mysterious, I’m going to go a little deeper.”

Who are these Pokémon?

Soon after, he bumps into an animal and the first thing he thinks is obviously that it is a Pokémon. He shuffles the option of whether it is a Growlithe or a Vulpix, but discards it because its tail has a red tip and it moves. With white fur, round yellow eyes, the Pokémon suddenly looks in your direction. At that moment, a cloud of black smoke rises and embraces him, causing the camera to fall to the ground. The two creatures look at the camera and there is a fade to black.

Pokémon Legends: Arceus is a new Gamefreak vision for the series, a video game that will not be open world in the end, but that will explore fresh concepts. It will be developed in the past and will be available on January 18 exclusively for Nintendo Switch. It should be noted that the remakes of Perla and Diamante are still planned for November 19, 2021.