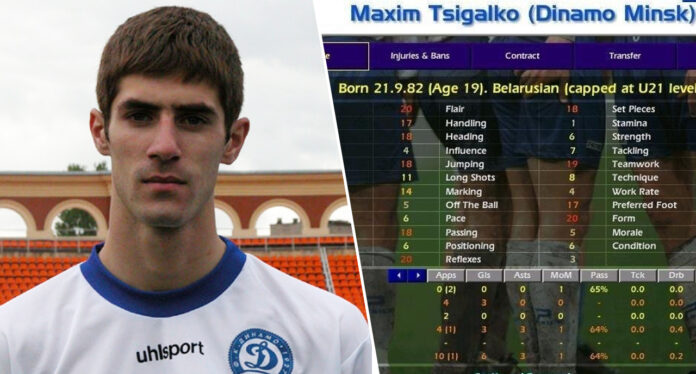 One of the legends of Championship Manager 01/02, former Belarusian footballer Maxim Tsigalko has passed away. The cause of death of the 37-year-old former football player is not yet known.

Why Maxim Tsigalko died is not yet known

For those who love management games, Maxim Tsigalko, who is one of the most important legends along with Mark Kerr, Kennedy Bakırcıoğlu, Tonto Zola Moukoko, Julius Aghahowa, Taribo West, died for a reason that has not yet been learned. The legendary name, in the Championship Manager 01/02 game, broke the records and established a throne in the hearts with the extraordinary number of goals each season, as well as its cheap cost.

Unable to reflect the exaggerated graphics of the game in real life, the Belarusian name started his football career in 2001 and wore the jerseys of the clubs Dinamo Minsk, Naftan, Kaysar, Banants and Savit. Tsigalko, who had a performance of 22 goals and 8 assists throughout his career, also scored 1 goal in 2 matches with his national team. Having put an end to his career at the age of 26 due to injuries he suffered, striker had to work under difficult conditions.

Tsigalko said in an interview with him that after he quit football, he started working in construction to earn a living for his family. He had organized a petition for Tsigalko, who used the words “Please let the world know that I need help” in the interview. In fact, the company that made the Football Manager game was asked to give a job to the player.