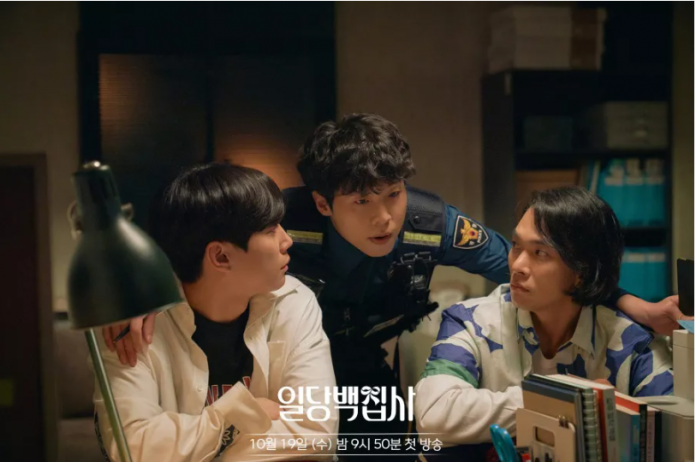 New footage from the upcoming drama “May I help you?” has been released!

“May I help you?” This is a drama that tells the story of funeral director Baek Dong Joo (Heri), who works tirelessly to fulfill the wishes of the deceased, always with compassion and a warm smile, and butler Kim (Lee Joon Young), who runs errands that start at a cost of 100 won (about 10 cents) per job. Together, the two run a business on behalf of Ildangbaek, a word hinting that one person does the work for 100, and also plays up the concept of running errands for just 100 won.

The latest footage shows Butler Kim, Vincent (Lee Kyu Han), the head of Ildanbek, and Seo Hae Ahn (Song Dok Ho), a policeman. In one photo, all three meet in Ildanbek and seem to be having a serious discussion. Butler Kim and Vincent give Seo Hae Ahn their full attention as he seems to be talking passionately about something. Viewers can’t help but be curious about what exactly is going on in Ildanbek’s house.

Another photo shows Vincent answering the phone with a smile, talking to someone who may be a potential client. A separate photo of Seo Hae Ahn shows a policeman in his uniform, who looks very busy when he looks at something or someone out of the frame with a serious expression on his face.

Zoe Saldanha Talks About The “special” Experience of Filming The Movie...