Home Entertainment Lee Chang Hyuk From AKMU Shaved His Head During The Performance of... 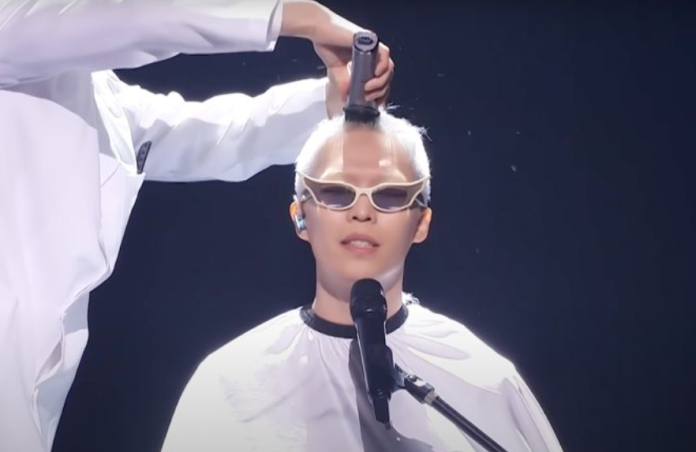 Lee Chang Hyuk from AKMU went viral because of the shocking performance of “Panorama”, where his head is buzzing on stage.

During the most recent broadcast of the South Korean live music show Inkigayo on October 23, Lee performed his debut solo single “panorama” from his album “mistake” released on October 17, sitting on a chair and shaving his hair on stage.

“I can’t die like this / I need to try everything on my wish list / My life was short and there was nothing left / And it passes like a panorama,” Lee sings into the microphone, dressed in a white cape showing the album title “Mistake”.

Lee’s debut album includes a total of 10 B-sides, with the exception of “Panorama”, entirely written and composed by the singer and songwriter himself. Jung Ha’s B also includes a collaboration with K-pop idol Jung Ha in “Goodbye, Be Healthy”, making it the only track featuring the artist in “Mistake”.

“Mistake” also marks Lee’s official debut as a soloist since he broke into the South Korean music industry as half of AKMU, a K-pop/folk sibling duo completed by sister and main vocalist Lee Soo Hyun. of the year 2020, releasing a separate single “Alien”.

Lee Chang Hyuk also worked as the main songwriter of AKMU and today is considered the author of the lyrics of most of the duo’s discography. He has also written lyrics for several singles by other artists, including Soo Hyun’s “Alien”, MEE’s “Ah Pooh”, Treasure’s “Topam”, “Thinking Of You” and Lee Seung-chol’s “We”, among others.

Skyrim Mod adds a Nemesis system in the Shadow of Mordor...