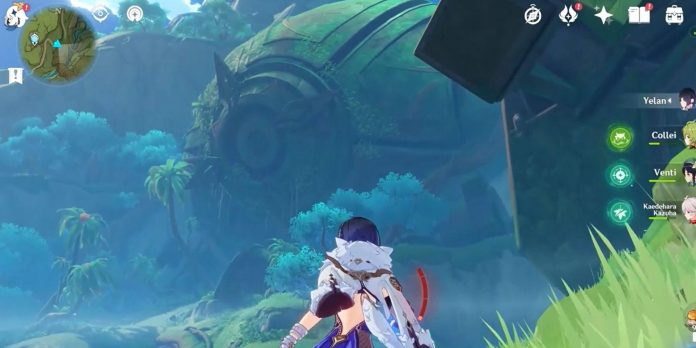 The world of Genshin Impact consists of seven different nations, and the game presents an interesting scheme for adding one new large region per year. At the moment, players can only explore three main nations: Mondstadt, Liue and Inazuma.

The live broadcast of the Genshin Impact 2.8 update has officially confirmed that the arrival of another nation named Sumeru is just around the corner. Recent leaks and rumors have revealed additional information about this magical region.

Genshin Impact insider under the nickname GI_DivineGaze published an interesting video in which the player explores the giant Guardian of the Ruins. The sleeping creature is so huge that it can be recognized on the recently leaked Twilight map. There is still no information about its origin, but there will certainly be more detailed information about this place in one of the next updates. The Guardians of the Ruins are ancient humanoid fighting machines that are said to be the remnants of a vanished civilization.

Exploring the ruins of a giant structure in 3.0 [via GI_DivineGaze] by Genshin_Impact_Leaks

The video lasts more than two and a half minutes, and the player still cannot explore the entire Guard of the Ruins, which indicates the size of this location. Numerous responses in the comments section claim that this huge machine was most likely part of the Old World, an era when dragons, known as the Seven Lords, were the masters of the world. Despite the fact that Genshin Impact has confirmed the appearance of several new characters, players seem to be more excited about the story of Sumeru.

Numerous comments claim to be amazed at how HoYoverse always manages to exceed expectations with each new update. Recent rumors about Genshin Impact have revealed that Sumeru is likely to be larger than Liyue, making it the largest major region in the game. However, it should be noted that players will most likely have to wait for a couple of additional updates for the entire main region to be unlocked.

The official history of the game has shown that the new region is filled with mysterious rainforests and deserts, but so far, only part of the map with rainforests is shown in the official teasers of Twilight, which means that deserts are likely to appear a couple of updates later. Recent map leaks have already hinted that the southwestern part of Sumeru will include a huge desert. This led most players to believe that one of the main goals of the entire story of Sumeru would be to bring the deserts back to life.

The Flash: Season 8 Will Premiere With Special Guests

Virgin River Season 4: The physical change of this actor that...