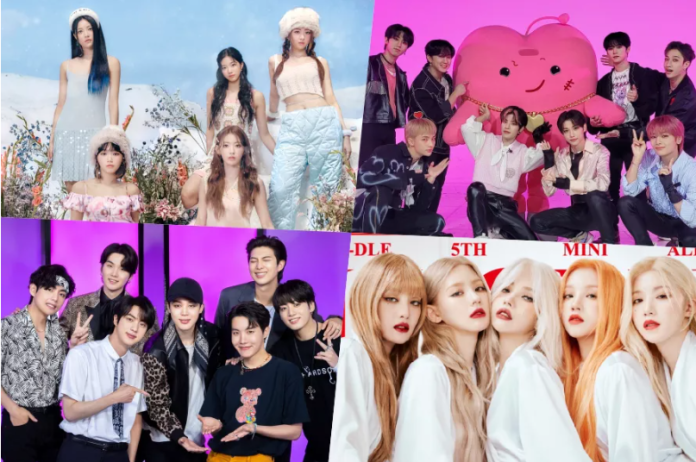 LE SSERAFIM’s new mini-album “ANTIFRAGILE” took first place in its second week on the World Albums chart, and also became the band’s first album to hit the Billboard 200 this week.

After two weeks at number one, Stray Kids’ latest mini-album “MAXIDENT” dropped to number two for the third week in a row on the World Albums chart, and also became the band’s first album to spend three weeks in the top 30 of the Billboard 200.

This week, BTS hit the top 15 of the World Albums chart again with three albums. Their anthology album “Proof” remained at the 3rd place in the 20th week on the chart, while their 2018 albums “Love Yourself: Tear” and “Love Yourself: Answer” occupied the 13th and 14th places in the 199th week and 190th week (both are inconsistent) respectively.

The new mini-album (G)I-DLE “I love” debuted at number 4 on the World Albums chart, and also became the band’s first album to hit the Billboard 200.

Meanwhile, TWICE’s latest mini-album “BETWEEN 1&2” took the 6th place on the World Albums chart for the ninth week in a row.

NCT 127’s studio album “2 Baddies” took the 7th place on the chart for the sixth week in a row, and “MANIFESTO: DAY 1” ENHANCED remained relatively stable at the 9th place for the 13th week.