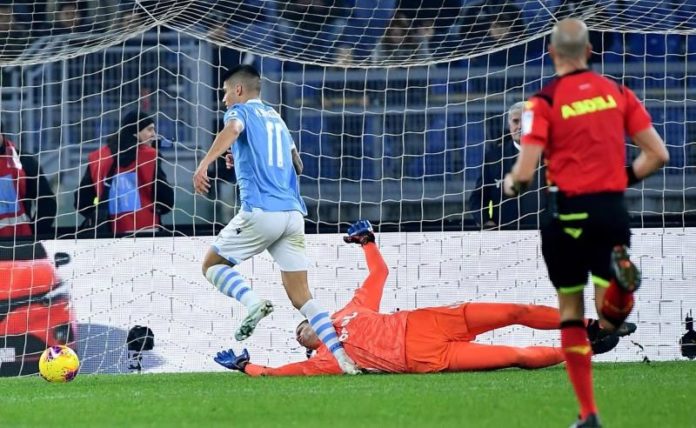 Lazio inflicted on Saturday the Juventus Turin the first setback of the year, winning 3-1 in the Olympic stadium with a recital of the Spanish Luis Alberto, author of two assists, and extended his flight in the Italian Serie A, which is third and separated by three points from the Turinese, seconds.

A triumph of Juventus in the Olympic would have allowed him to regain the league leadership after Friday’s 0-0 between Inter Milan’s leader and Rome, but coach Maurizio Sarri’s men ran into a fierce and euphoric Lazio, who chained his seventh consecutive win.

The Portuguese Cristiano Ronaldo advanced the current champion of Italy, but the goals of the Brazilian Luiz Felipe, the Serbian Sergej Milinkovic-Savic and the Ecuadorian Felipe Caicedo turned the scoreboard and extended the climbing of a Lazio who also missed a penalty with Ciro Immobile .

The Olympic Stadium hosted a spectacular round-trip match between two teams that did not speculate at any time and bet on technique, rhythm and combinations to go with everything to the three points.

Lazio pulled his four stars, Ciro Immobile, the Argentine Joaquín Correa, Luis Alberto and Milinkovic-Savic before a Juventus who went out with a hungry Christian, after the latest controversies over the Golden Ball to the Argentine Lionel Messi, next to Dybala .

Cristiano’s hunger infected a Juventus who pressed aggressively and who came forward in 25 thanks to CR7 himself, who took advantage of a great play by Dybala and a perfect assistance from the Uruguayan Rodrigo Bentancur, bastion of the Turinese until minute 40, when He had to retire for physical discomfort.

Cristiano had a good chance to extend distances, but the Albanian goal Tomas Strakosha stopped his powerful header and, just before the break, Luis Alberto hung a comfortable center that Luiz Felipe headed hard to send the two teams to the break with the draw in marker.

The show and the rhythm of the first half did not drop in the resumption. He even increased and saw Juventus miss a huge opportunity with Dybala after a Lazio ball-out failure. The “Jewel” looked for a left-handed shot that ended up central and that passed a bitter bill to his team.

A few seconds later, Manuel Lazzari was shot down by the Colombian Juan Guillermo Cuadrado when he was thrown towards the rival goal and the referee sent him off with a direct red after reviewing what happened to the VAR (m.72).

He left the field very angry Square, who even had an altercation with his partner and captain Leonardo Bonucci, and Juventus succumbed in 75 to a new wonder of Luis Alberto, who gave a long pass to Milinkovic-Savic to control it and beat the Szczesny with an excellent shot.

Luis Alberto has 11 assists in this European campaign. No one gave more winning passes than he did in the five major continental leagues. The closest to him is the Belgian Kevin De Bruyne of Manchester City, who gave nine.

The Olympic was trembling with euphoria and Lazio was able to put the icing on his party in 77, when Correa achieved a clear maximum penalty after being knocked down by Szczesny. Immobile, who has 17 goals this year and nine consecutive games watching the door, failed the transformation against the Polish goalkeeper, who also denied him the goal in the rebound.

He left a Juventus alive in which coach Maurizio Sarri gave way to Argentine Gonzalo Higuaín instead of Dybala. The current champion of Italy came to hang some dangerous centers, but his attempts had no prize.

Lazio had to suffer until the last minute of the added time, when Felipe Caicedo picked up the rejection of Szczesny at the end of Lazzari and signed the final 3-1 to inflict Juventus the first setback of the year and place his team only three points of the Turinese.