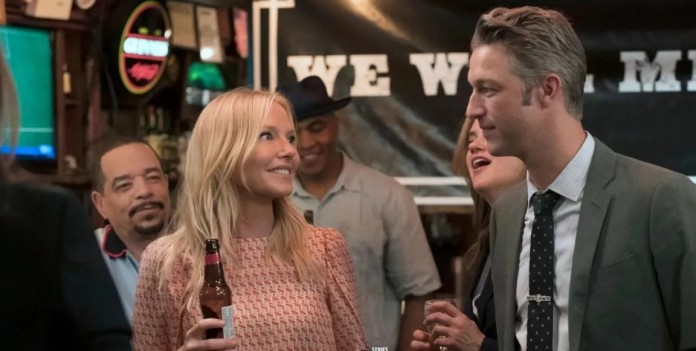 Law & Order: SVU is a long-running crime drama on NBC, which is not exactly characterized by featuring many romantic moments. However, since it is a television drama, it is necessary for the writers to occasionally include these types of stories in the program, trying to give the plots a bit of softness.

The first couple Law & Order: SVU fans want to see is Cap. Olivia Benson (Marisk Hargitay) and Det. Elliot Stabler (Christopher Meloni). However, at the end of season 22, loyal viewers of the procedural drama were in for a surprise when during Finn’s (Ice-T) wedding, Dominick Carisi (Peter Scanavino) and Amanda Rollins (Kelli Giddish) finally kissed.

Although fans have been waiting for this moment for some time, what they least imagined was that it would happen at the end of season 22 of Law & Order: SVU. Undoubtedly, this left many delighted, being that the greatest reason for anxiety to see the arrival of season 23 that is currently taking place on NBC, showing them in love and navigating their new dynamic as a couple.

Since they began their journey as Law & Order: SVU companions in season 16, many crime drama fans have hoped to see Amanda Rollins and Dominick Carisi grow into something more, as on screen they have always had a great friendship, but the chemistry The couple’s romanticism was undeniable.

Series star Kelli Giddish admitted in an interview how she felt kissing her co-star Peter Scanavino on the set of Law & Order: SVU. While Amanda Rollins’ performer on the show and Carisi’s actor in real life are close friends, she admitted that kissing him feels like she’s kissing her brother.

NBC series star Kelli Giddish said that as actors they know their characters’ relationship inside and out. This is what the actress told Smashing Interview, in addition to stating that her friendship with the co-star of the drama is very similar to that of a brother of hers. This added:

“I think we both have such a strong feeling about what should be between them,” she said to her. “I think it’s easy for us to know what it should be.”

“But it’s very important for us to honor that relationship. I think we’re willing to put that behind us and say, ‘Okay. This is a great thing for these characters, for our audience, and for the fans of the show.”

NCIS: Tony DiNozzo interpreter hinted at return of his character and...