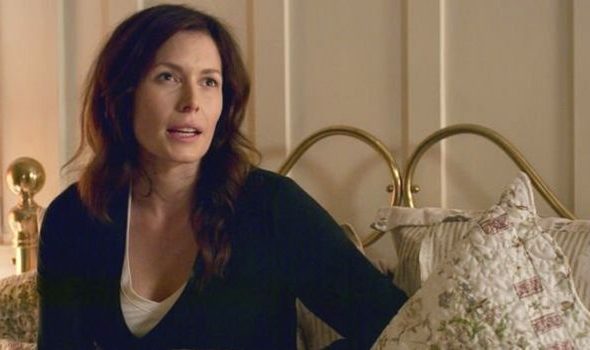 Charmaine Roberts (Lauren Hammersley) has quickly become one of Virgin River’s most hated characters over the course of the first two seasons. However, the Canadian star explained that this might not have been the case if the Netflix adaptation had stayed with Robyn Carr’s original descriptions.

In turn, Virgin River main antagonist Lauren Hammersley has confirmed that her role as Charmaine Roberts underwent a series of changes from the original material.
Based on the small town romance novels by Robyn Carr, Charmaine was first introduced as a friend with benefits to Jack Sheridan (Martin Henderson), one of the series’ two romantic leads.

But sadly, her Charmaine quickly became the series’ least fan-favorite character, as she made frequent efforts to come between Mel Monroe (Alexandra Breckenridge) and Jack’s budding romance. However, she may not always have been like this, as Hammersley detailed in a recent interview.

“I’m paraphrasing, but the description of Charmaine in Robyn Carr’s books is basically that she’s 10 years older than Jack and you could tell she used to be beautiful before she had some kids,” admitted the actress.

On the other hand, the Canadian actress admitted that she suffered a low blow to her self-esteem when she was told the initial description of Carr for her role in the Netflix series, however this was not an impediment for her to regain her composure and negotiate the terms for the description of your character.

“This industry is amazing, whenever you feel really good about something, it has this way of taking you down,” the actress said.

Fortunately, the first description didn’t fit and Charmaine was rewritten to more accurately reflect what Hammersley would bring to the role. On the other hand, the Netflix adaptation minimizes the age difference of Charmaine and Jack in the original book, making their characters more in line with the respective ages of the Virgin River actors.

Lesley-Ann Brandt (Lucifer) with her cute abs on Instagram!