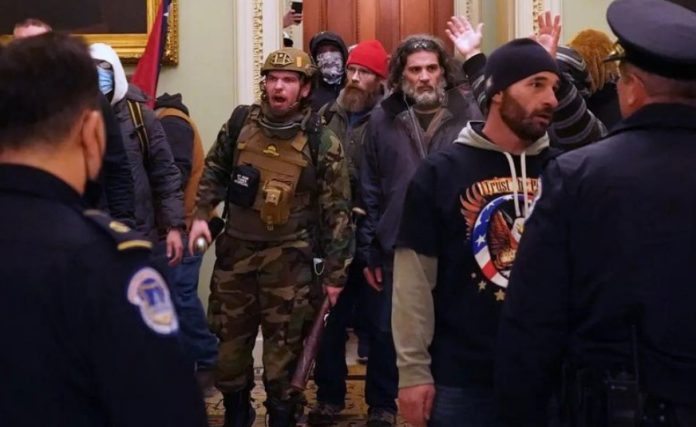 Last minute … After US President Donald Trump’s rally in Washington DC, his supporters crossed the barricades and entered Congress. As the convention building was evacuated, Fox News reported that a person was shot with a gun inside the building. A curfew was declared in Washington due to the events. Many US politics and media described the events as a ‘coup attempt’

US President Donald Trump ‘s rally in Washington, his supporters crossed the barricades and entered Congress.

It was seen that there was a conflict between Trump supporters and the police in front of the congress building. It was stated that the police evacuated some buildings in the complex, including the Congress.

While tension and confrontation is experienced outside the congress building, a presidential vote is held inside. The US Senate convened today to approve the presidency of Joe Biden.

According to Reuters, the election session held in Congress was suspended. Congress police announced that entry and exit into the building have been stopped. People in the congress building were advised to stay in their rooms and stay away from windows.

American media reported that some demonstrators managed to enter the Congress building.

At today’s rally, Trump denied that Democratic Party’s Joe Biden won the presidential election on November 3, 2020, claiming that he was the real winner.

SOMEONE IS HITTED, THEIR SITUATION IS CRITICAL

According to the news in Fox News, a person was shot with a gun inside the Congress building. CNN International announced that a woman was shot in the chest inside the building and her condition was in critical condition.

It has been announced that US Vice President Mike Pence and Speaker of the House of Representatives Pelosi have been evacuated from the building.

FIRST EXPLANATION ON EVENTS FROM TRUMP

US President Donald Trump made a statement on his Twitter account after his supporters raided the Congress building.

Trump said, “Support the congressional police and security forces. They really are on our country’s side. Stay peaceful!” used the expressions.

US Vice President Pence called for “ending the events in the Congress building” and stated that violence will not be tolerated.

According to the New York Times report, an explosive object was found at the Republican Party Headquarters. It was stated that the explosive was safely neutralized.

The newspaper announced that the Democrats’ headquarters was also evacuated.

INSTRUCTIONS FROM TRUMP TO NATIONAL GUARDERS

The Speaker of the House of Representatives Pelosi and Washington Mayor Bowser had demanded that the National Guard be sent to the city.

According to the news in the Washington Post, the Pentagon rejected the requests of the National Guard to be sent to Congress.

Shortly after the Washington Post’s news, the White House announced that Trump had instructed the National Guard to “intervene in the events at the Congress building”.

A BAN TO THE STREET IS DECLARED IN WASHINGTON!

The Mayor of Washington DC announced that a curfew had been declared from 6 pm to 6 am.

Congress police asked the deputies in the House of Representatives to have gas masks available under their seats.

Police are accompanying attorneys to be evicted from the building, Reuters reported.

PENSILVANIA GOVERNOR: THIS IS A COUP ATTEMPT

Pennsylvania Governor Tom Wolf described the entry of demonstrators into the Congress building in the capital, Washington, as a “coup attempt”.

Wolf made a statement on Twitter about the protesters who protested the Congress session, where the results of the elections held in the USA on November 3, 2020, will be officially crossed the barricades and entered the Congress building.

“What we see today is not democracy, but the coup attempt.” Using his statement, Wolf called on the Republicans to stop the violence, stating that the United States made a fair and free choice and the result was clear.

a group of Trump supporters & militia gathering in front of the Georgia State Capitol building in Atlanta. some of them listening to President Trump's speech live on their phones. pic.twitter.com/gSsBzsVByC

According to the news in the BBC, a group of Trump supporters in Atlanta, Georgia, marched towards the state building with long-barreled guns.

At the demonstration in Washington, some people were detained for possession of weapons, but according to the laws of Georgia, people clearly have the right to carry weapons.

In Georgia today, elections for two senatorial seats have been held, if the Democrats win the lead election they will take control of the US Senate.