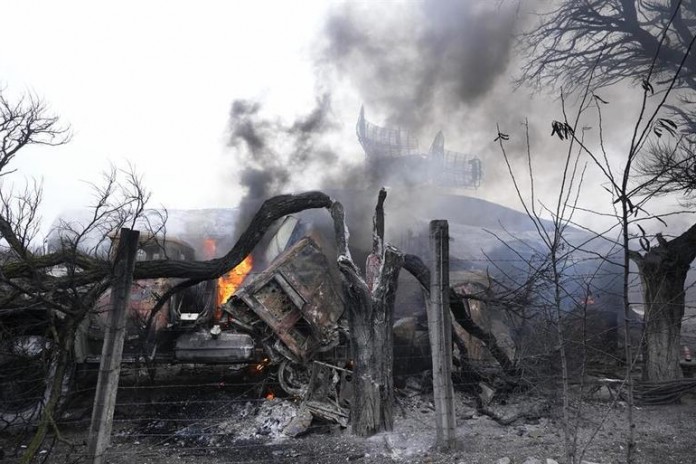 According to the breaking news, there has been fear in the Russia-Ukraine crisis, where tensions have escalated rapidly for days. Russian President Vladimir Putin announced that they have launched a special military operation in Donbas in eastern Ukraine. “I want to appeal to foreign powers,” Putin said. “Whoever tries to pose a threat to Russia will be dealt with immediately,” he said. “Russian forces have entered the Kiev region,” said a statement by the Ukrainian border guards. After Putin’s statements, sirens are heard in Kiev, while people are trying to leave the city. Kremlin, on the other hand, said in a statement that “Putin will determine the duration of the operation, there is no invasion”. Here are the minute developments from the region…
The Russia-Ukraine war started with the order given by Russian President Putin to the army in the morning. Many regions in Ukraine, especially the capital Kiev, were the target of attacks. While the Ukrainian army announced that the Russian tanks had crossed the border, the world, especially the USA, reacted to Russia. Ukrainian leader Zelensky, who ordered the army to “do maximum damage to the enemy”, also called for resistance to the public. Here are the latest developments, minute by minute, from the region where the conflict news came from…

16.09: Ukrainian Ambassador Bodnar said, ‘Our military cargo plane was shot down, 10 of our soldiers lost their lives’.

16.06: In the statement made by the Russian Ministry of Foreign Affairs, it was stated that ‘Special Operation in Ukraine is not the beginning of the war, but an attempt to stop the global war’.

15.52: The Belarusian Ministry of Defense announces that it has increased its border defense to prevent possible infiltration of ‘sabotage groups’.

15.38: French President Macron said, “France is with Ukraine in the crisis”. Describing Russia’s attack on Ukraine as “a turning point in European history”, Macron promised to respond to Russia.

15.35: Ukraine: 2 Russian helicopters were shot down near Kiev.

15.15: Ukraine State Emergency Service: Ukrainian plane was shot down, 5 people died. It was announced that there were 14 personnel on the plane.

15.05: British Prime Minister Boris Johnson, ‘A free, independent European country must ensure its own destiny. England is also on the side of this right,’ he said.

Saying that Russia is facing ‘big’ new sanctions from the West, Johnson described Putin’s invasion of ‘dictator’ Ukraine as a ‘disgusting and barbaric attempt’.

14.53: In the statement made by the border guards of Ukraine, it was said that “Russian forces entered the Kiev region”.

An AFP reporter in the area said the low-flying helicopter was flying towards the city.

14.32: 18 people were killed in an air attack on a military base near the Black Sea port city of Odessa, Ukraine.

In the statement made by the local government on the subject, it was stated that 8 of the dead were women and the debris removal works are still continuing.

FIRST STATEMENT FROM THE KREMLIN

14.06: ‘No one talks about the invasion of Ukraine’, Kremlin Spokesperson Peskov said, ‘Putin has revealed what he expects from Ukraine, he wants it to maintain its neutral status and not to deploy offensive weapons’.

Peskov continued his words as follows;

‘The expression of occupation is unacceptable, what we want is the liberation of Ukraine, the cleansing of the Nazis, our operation aims to achieve these goals.’

14.03: According to the news in Russian Sputnik, the Ukrainian missile attack hit 2 Russian civilian cargo ships in the Sea of ​​Azov. It is stated that there are dead and injured.

More than half of Brazilians fear spying on webcam