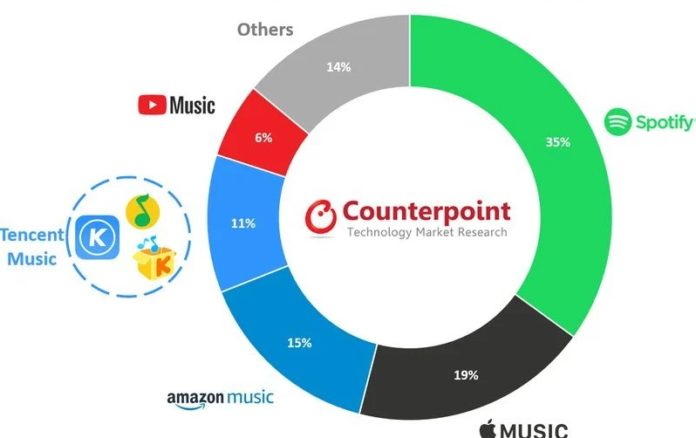 One of the most common things that many of us do during the day is undoubtedly listening to music. There are many different platforms we can use for this. So, have you ever wondered which ones are the most used among these platforms?

Counterpoint Research, also known for its market research, has released its new research showing which music platforms are used more. According to the research conducted by the company, online music broadcasting platforms grew 32% in 2019 compared to the previous year and reached 358 million users.

Most used music platforms
As expected, Spotify sits in the leadership seat with 31% of its market share in total revenue and 35% of total paid subscriptions. Just behind the Swedish-based music platform is the music listening platform of the US technology giant Apple.

According to research published by Counterpoint Research, Apple Music appeared just behind Spotify, with 24% of total revenue and 19% of total paid subscriptions. The number of subscribers of Apple Music is estimated to have increased by 36% in 2019 compared to the previous year.

Counterpoint Research used the following statements in its published research:

“Spotify; The Spotify Premium subscription, which it offered for free for three months, kept its leadership seat with the help of promotions such as discounts, customized campaigns and special contents it focused on. Technology giants like Amazon, Apple and Google have started focusing on music publishing and have the budget to compete with Spotify. Apple Music is making improvements in the development app, with night mode and playlists organized by targeted group. Similarly, Amazon Music is experimenting with lossless music and creating its own niche, where it competes with Tidal. ”

According to the company’s research, Amazon Music, Tencent Music and YouTube Music come right after these two platforms. According to the research, more than 80% of total revenues are paid subscribers. The rest are advertisements and partnerships with brands.

US-based technology giant Apple announced in June last year that the number of subscribers of Apple Music reached 60 million. Although the company has not made any explanation about the number of subscribers in 2020, if we consider that it has been over half a year, we can say that this number has increased. So, which of these platforms do you use?