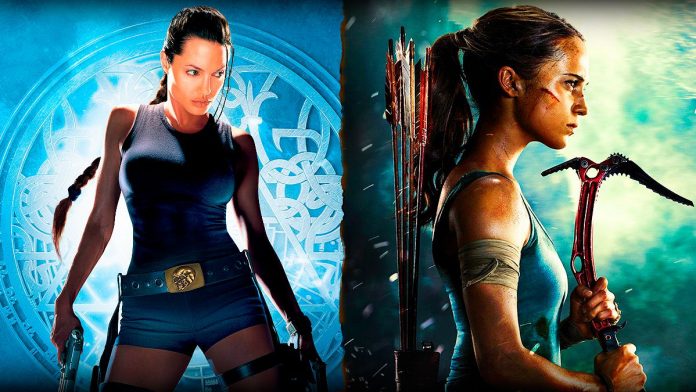 We review all the movies, series and other audiovisual works of Tomb Raider in which Lara Croft has appeared as the protagonist.

Lara Croft is a video game icon and there’s no question about it. Throughout 25 years we have been able to accompany her on countless adventures embodied in a multitude of video games. If we ask our parents or anyone outside the industry if they know Croft and their answer is yes, is it because he has equipped himself with his mythical dual pistols to take down the dangerous T-Rex resting in the Lost Valley? It is a possibility, but most likely, she will put the face of Angelina Jolie to the protagonist.

Lara’s appearances on the big (and small) screen have been varied and in fact the sequel to Tomb Raider (2018) is currently in the works, with Alicia Vikander playing Croft once again. Therefore, and in order to commemorate once again the 25th anniversary of the saga that is celebrated this year 2021, we proceed to do a complete review of the films, animated series and others in which we have been able to discover even more adventures of Lara Croft of which we have already played and enjoyed at the controls.

The idea of ​​bringing the Tomb Raider saga into the movie world arose long before it became a reality. It was around the time of Tomb Raider II (1997), when the character was beginning to gain considerable worldwide fame, that Core Design (the studio that created the saga and developed its first games) received the first offer from “a famous studio of animation”. However, they rejected her for not seeing the matter entirely clear. It wasn’t until Paramount Pictures’ offer was on the table that they finally decided to take the plunge:

“It was a very cool approach for us and it was something that relaxed us more than becoming anxiously protective. If we didn’t like something about the script, the casting or the general direction of the project, we would just have to say so and they assured us that they would change it. And they were true to their word in every way, ”says Adrian Smith, COO at Core Design at Lara Croft: Tomb Raider – The Official Film Companion.

With this premise based on a certain fidelity to the original games, the project began to be prepared and various names such as Catherine Zeta-Jones, Ashley Judd and Jennifer López were considered before deciding with Angelina Jolie to play the protagonist. The actress commented in several interviews that she carried out at that time that she was initially not very sure of wanting to accept that role, since she would raise her profile to a much greater recognition than she had at that time.