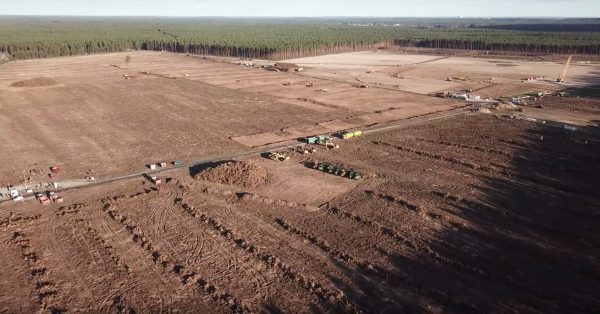 The construction site of Tesla’s Gigafactory factory in Berlin, the capital of Germany, was viewed from the air. As part of the ongoing studies in the shadow of the coronavirus epidemic, ground leveling operations were performed.

Tesla continues the construction work of the Gigafactory in Berlin, the capital of Germany, despite the coronavirus epidemic that affects the whole world, causing thousands of deaths and as a result affects many sectors.

A video shot from the construction site with a drone shows the first stage of the work carried out in the field. It is understood from the video that the factory will be built on a fairly large area.

Work continues at the Gigafactory:

Earlier this month, Tesla had recalled US employees working in Gigafactory Berlin for coronavirus concerns. German media reported that due to the outbreak, the timeline of the construction of the plant, which will be Tesla’s first large-scale factory in Europe, may be affected. The US-based automaker, owned by Elon Musk, was planning to start building the first building this month and be ready for production by July 21.

According to images shared by a YouTube user, work continues on the project site on a 300-hectare land next to the region called ‘GVZ Berlin-Ost Freienbrink’. In the first stage works reflected in the images, it is seen that ground leveling works have been carried out in the area where the Tesla factory will be built. The plans of the Gigafactory were leaked last year and details about each part of the planned factory were revealed. You can examine the plan and the numbered regions in the image below.

US entrepreneur Musk said that batteries, powertrains and automobiles will be produced at Tesla’s Gigafactory plant in Germany. The factory is expected to focus on Model Y production at the first stage. The construction of the building was planned to begin this month and it was expected to attend the groundbreaking ceremony of Musk, but it is not clear whether this is still the case due to the outbreak of the coronavirus.

Taylor Swift confirms RED album was about her breakups

Instagram Reels will have new buttons in the app

Billie Eilish epic response for the troll criticizing her body

The Google Phone App Now Shows Why Businesses Are Calling

Persona 5 Scramble could reach the West in 2021

IPad models with Fortnite installed after ban are on sale