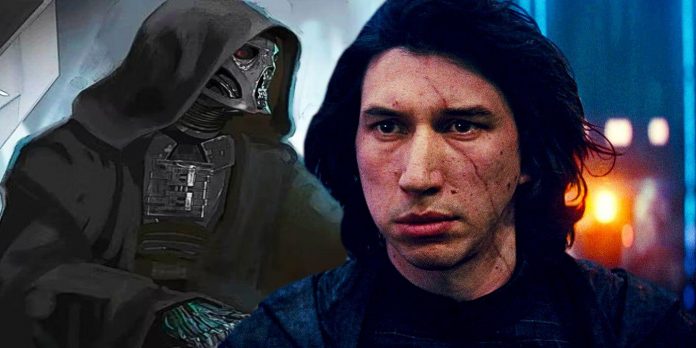 The antagonist of the “Star Wars” sequel trilogy, Kylo Ren, was initially presented as a darker character who was perhaps even too dark for Disney, which led to his cinematic form. Kylo Ren is another type of dark side villain in the main Star Wars saga, whose internal conflict and emotional outbursts distinguish him from colder and more calculating villains such as Emperor Palpatine and Count Dooku. One of Kylo’s first conceptual incarnations, known as the “Grave Robber,” seemed to come from a more familiar school of thought as far as the villains of the Star Wars saga are concerned, but his more evil early appearance and name suggest that Lucasfilm and Disney have mitigated the situation. down, which was ultimately the right move.

The final origin of Kylo Ren is comparable to the origin of the Legends character Darth Caedus, although greatly simplified. Like Caedus, Kylo Ren is the pseudonym of Han Solo and Princess Leia’s son (and their only child, unlike the legend). Originally known as Ben Solo, Kylo Ren’s fall to the dark side occurred when he was a student of Luke Skywalker, which led him to join not the Sith Order like Darth Vader and Darth Caedus, but the Knights of Ren, of which he soon became the new leader. Apart from the fact that Kylo Ren is part of a philosophically different religion of the dark side, different from the religion of the Sith, Kylo Ren has several key differences from his idol, Darth Vader, the biggest of which is that he wants to be like Darth Vader, instead of accepting this fate.

Related: “Star Wars: How the Knights of Ren differ from the Sith”

This kind of fascinating complexity and contradictions may not have existed in the concept of Kylo Ren “Grave Robber”, featuring a more creepy and frightening character than Kylo Ren, who was seen in the movies, and whose skull-like mask would have caused much more horror in the audience. and the characters, along with the terrible consequences of his nickname. The decision to make Kylo Ren a less intimidating character could have been motivated not by the desire to make Star Wars family, but by the desire to humanize the character. The final version of Kylo Ren is a terrifying and unpredictably bloodthirsty character, but his humanity and constant internal turmoil would not have been possible with a more frightening but less humanized character concept such as Grave Robber.

How would a grave robber differ from Ben Solo

Little is known about the Grave Robber as a character, other than his acquisition of Darth Vader’s charred helmet and a pose suggesting he is talking to him like the canonical Kylo Ren. The grave robber could turn out to be a person who does not have a family connection with such characters as Darth Vader or Palpatine, but simply obsessed with the departed warlords, which could make him a dark reflection of Jakku-scavenger Rey. The problem is that the concept of Grave Robber seems to place too much emphasis on intimidation and secrecy, whereas it was the opposite of these qualities that ultimately made Kylo Ren such an irresistible villain.

Kylo Ren is a rough nerve who wears the traditional Ren Knight helmet, which is quite different from Darth Vader’s Sith mask, but still visually hints at his desire to emulate his fallen grandfather. Kylo Ren’s misguided and contradictory goals, which are largely motivated by Palpatine’s undead manipulations, work just as well as they do because there is no mystery around him. Kylo Ren’s atypical level of emotion and lack of mystery made him stand out as a Star Wars villain, and the darker concept of Grave Robber, although visually pleasing, could not demonstrate these traits as well.