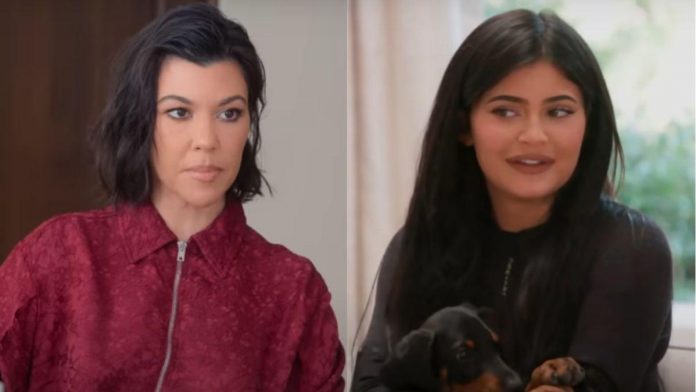 Kylie Jenner has been at the center of a backlash for weeks after the youngest of the Kardashian-Jenner siblings posted a photo of her and her boyfriend (or perhaps fiance?) Travis Scott standing between their respective private jets. The caption mused that the couple should take “mine or yours?” and the post went viral and fans called out the makeup mogul on a number of issues. Among these criticisms, an argument emerged that this was not something new for the famous family. In fact, Jenner’s sister, Kourtney Kardashian, was dealing with her own similar controversy earlier this year.

While the founder of Kylie Cosmetics has faced a backlash for environmental damage caused by the short trips she is known to have taken on her Bombardier Global 7500, Kourtney Kardashian was similarly criticized about six months ago. The eldest of the Kardashians posted a carbon dioxide tracker in her Instagram stories back in February, saying, “It’s time to get together.” The post was captured by a Reddit user, where fans began berating Kardashian and her family, wondering if it was time for them to stop using their private jets. One commenter said:

It’s so frustrating to see them posting such things while living a really wasteful life, even though they have all the means to try to be as sustainable as possible :/

Another commenter said it annoys him when celebrities beg their fans to take measures that they themselves don’t seem to want to carry out. Some wondered what Kourtney Kardashian was doing to reduce her carbon footprint.

Oh, my God, it’s so aggravating. for example, one tweet said: “do something about it, and then bags of money.” how? Are you going to help climate refugees… support local urban and sustainable agriculture… commit to travel less and buy…? for example, what exactly are you doing, other than being unbearable and wildly disconnected from reality? your carbon footprint is 10,000 times that of the average person, miss. girl 🙄

These comments are very similar to the reviews that Kylie Jenner received in her post about a private jet. Since fans don’t agree that the billionaire is bragging about her wealth and doesn’t seem to be aware of the world in which many are struggling with the current inflationary crisis, it was the environmental impact that made many commentators take up arms, especially considering that Jenner is driving 30 minutes in the opposite direction to get to his plane for a flight, which would initially take only 39 minutes. In response to Jenner’s question, “mine or yours?” question, one fan answered:

Maybe don’t take either and reduce your carbon footprint

The dispute over a private jet is not the only noise that Kourtney Kardashian and Kylie Jenner have faced lately. Kardashian had to speak out after an Instagram user posing as her son Mason started a rumor that Jenner and her boyfriend were getting married. Jenner caused more of a stir on social media when a cryptic comment on Travis Scott’s Instagram post made fans think the couple might be pregnant with baby #3.

The life of the Kar-Jenners is never boring, and we’ll be able to see more of their antics when The Kardashians return to Hulu for a second season on September 22. Meanwhile, the first season is available for subscription streaming. in Hulu. Be sure to check out our TV program for 2022 to find out what other premieres are expected in the near future.

Leaks of the release date, trailer and other remaster of The...