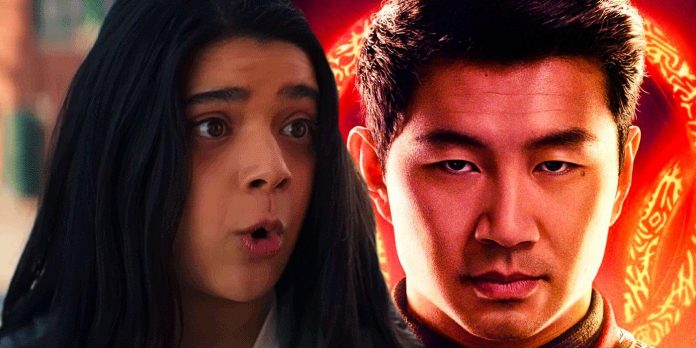 Warning: This article contains spoilers for the third episode of “Miss Marvel”.

Ms. Marvel has just shown a link to the mysterious Ten Rings featured in “Shang Chi and the Legend of the Ten Rings.” The latest MCU Disney+ series finally delves into the backstory of the bracelet that endows Kamala Khan (Iman Vellani) with her incredible strength, while viewers have begun to notice the connection between Kamala’s bracelet and Shang-Chi (Simu Liu) accessories. A small Easter egg in episode 3 of “Miss Marvel” “Doomed” may indicate a connection between them.

In the prologue to the third episode of Miss Marvel, the ClanDestines, a group of genies that includes Kamala’s great-grandmother Aisha (Mehvish Hayat), discover a bracelet in British-occupied India in 1942, buried under rubble and worn on a severed blue hand. It turns out that the bracelet is one of the pair, the location of the other is still unknown, and that it can act as a key allowing the genie to return to his dimension after exile. At these moments, viewers see the ruins from a bird’s-eye view, in which ClanDestine stands on the symbol of the Ten Rings cut into the ground. This small teaser may answer some questions related to the origin of the Ten Rings in Shang Chi and the legend of the Ten Rings.

Related: Shang-Chi: Who (or what) is calling the Lighthouse

Ever since viewers first saw Kamala’s bracelet in episode 1 of Miss Marvel’s Generation Why, there has been a connection between the bracelet and the Ten Rings, especially when it comes to their appearance. Both are gold with the same symbols written on them, both are worn on the user’s hands and glow with bright colors when worn, and both endow the user with unimaginable power. It is not yet known in the MCU how Mandarin/Wenwu (Tony Leung) acquired the Ten Rings, so it can be assumed that both artifacts, given their similarity, originated from the same place, perhaps both originate from the Genie dimension. In the comics, the rings arrived on Earth on Makluan’s spaceship, but since this race of aliens has not yet been introduced to the MCU, as well as with massive changes already made to Kamala Khan’s own power set, this is probably the origin of the ring could be changed. With that in mind, it would make more sense if the Easter egg of the 3rd episode of “Miss Marvel” teased an altered origin that connects the Ten Rings and Kamala’s bracelet.

The last time the audience saw the Ten Rings, they were tested by Wong (Benedict Wong) during the scene after the credits of the movie “Shang Chi and the Legend of the Ten Rings”, and it turned out that they were sending a beacon somewhere to an unknown place. space. Amazingly, even Kamala’s idol Captain Marvel (Brie Larson) I have not seen such alien technologies. If, in fact, both ornaments are made using the same technology and originate from the same place, perhaps the beacon sent by the rings at the end of Shang Chi was calling other djinn or even something darker. from their dimension. This can lead to miracles if Captain Marvel is sufficiently interested in the location of the lighthouse of the rings.

With the short Easter egg “Ten Rings” in the last episode of “Miss Marvel” and their obvious similarity, it becomes clear that there is some direct connection between the rings and Kamala’s bracelet. Three episodes of “Miss Marvel” have yet to be released, and the sequel “Shang Chi and the Ten Rings”, which we hope will reveal the mystery of the rings, is already in production. It is likely that in the near future viewers will receive answers to all their questions.