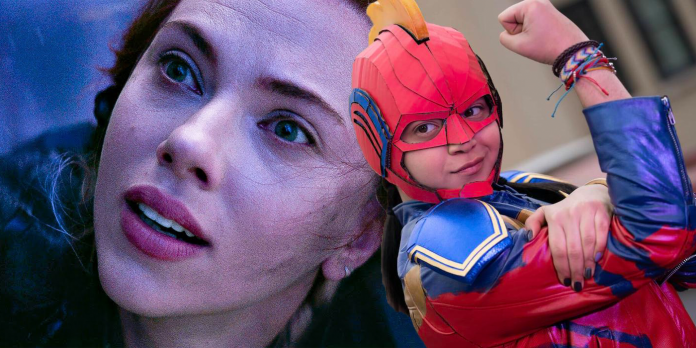 Warning! Spoilers ahead for Miss Marvel.

Marvel just disrespected the Black Widow (Scarlett Johansson) and her victim again in the second episode of “Miss Marvel.” Iman Vellani made her debut as Kamala Khan in the Disney+ series, and although the series focuses on telling the story of her origin, references to the larger universe to which she belongs. After the inclusion of AvengerCon in the 1st episode of “Miss Marvel”, a more subtle but disparaging reference to Natasha Romanoff, also known as the Black Widow, appears in the 2nd episode.

Kamala, a 16-year-old Jersey native, gains superpowers after a mysterious bracelet sent by her equally mysterious grandmother reveals her special abilities. Marvel Studios has done a great job so far, distinguishing Miss Marvel from past Disney+ series, based on the story of the character growing up. Also, what makes her so unique is that she’s a big fan of the Avengers, especially Captain Marvel (Brie Larson). While the show is meant to glorify everything about the Avengers as a reflection of Kamala’s devotion to them, Ms. Marvel disrespects some of these characters by drawing a deliberate parallel.

Having discovered her new abilities during AvengerCon, in episode 2 “Miss Marvel” Kamala explores her special abilities with the help of her best friend Bruno (Matt Linz). At one point they climb up to the roof and check the “hard light”, but due to the fact that she doesn’t know how it works, she falls, and luckily Bruno catches her. When Kamala is hanging from the eaves of the building, she tells him: “You have to let me go”, repeating the last words of the Black Widow to Hawkeye (Jeremy Renner) on Wormira in “Avengers: Finale” and her last words in the MCU chronology, period. The difference is that Kamala is only five feet above the ground, so she landed safely, and Natasha falls to her death. This moment in “Miss Marvel” is played out for laughs, but given its similarity to the still controversial death of Black Widow in “Avengers: Finale,” it can be interpreted as a blow to what was supposed to be one of the most tragic moments in the MCU.

The framing and over-dramatization of the moment in the 2nd episode of “Miss Marvel” were an obvious reference to Natasha’s death in the “Finale” and could be seen as a mockery of her victim. However, it can also be seen as a moment symbolically highlighting how little Kamala knows about what it really means to be a superhero. Right now, she thinks that being an Avenger means wearing a cool suit, having amazing superpowers and saving people easily. The loss and mortal danger of being a superhero, as well as the sacrifices that Black Widow has made, are not yet real for Ms. Marvel. Kamala is a big fan of the Avengers, and thanks to the Ant—Man (Paul Rudd) podcast in Miss Marvel, she, along with the MCU audience, knows about what happened in the final battle of The Avengers: Finale. However, this is the limit of her knowledge. Ant-Man heard about what happened next, but he wasn’t with the Black Widow and Hawkeye on Vormir when she decided to sacrifice herself for the Soul Stone. Kamala listens to these stories simply as stories.

However, given that she is already on the radar of the Department of Damage Control agents, it seems that Kamala Khan will soon learn about the more unpleasant realities of superheroes. Given Kamala’s obsession with the Avengers, viewers can expect more MCU references in “Miss Marvel” that match the differences between her and seasoned superheroes. There have already been other tributes to Earth’s Greatest heroes, Guardians of the Galaxy and other franchise heroes. Let’s hope that Marvel Studios relies on them and avoids those that may be perceived as offensive, such as references to the death of the Black Widow.

Xbox Shows The New Color Of Its Range Of Controls: This...