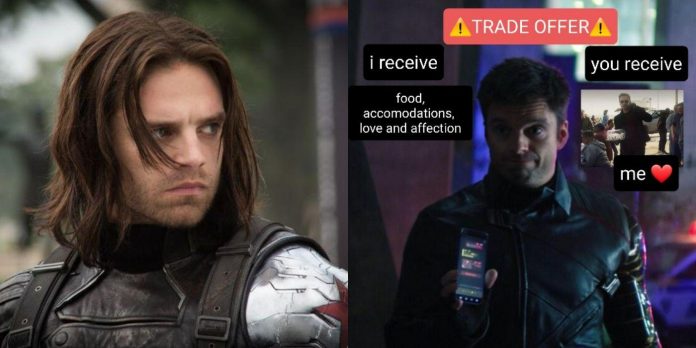 With Marvel Studio President Kevin Feige clarifying that the next phase of the MCU will become clearer over the next few months, fans have questions about where Bucky will fit into the future of Marvel. Having been in the MCU for over a decade, Bucky’s recent appearance in The Falcon and The Winter Soldier suggests that he has more story to tell, whether working alongside Sam Wilson or going on his own journey.

As the Steve Rogers’ childhood best friend, Bucky Barnes has been a fan favorite since his introduction in Captain America: The First Avenger. Although a man of few words, he always managed to steal the show in whatever scene he was in. Several memes about Bucky Barnes showcase his rough history from working as a HYDRA assassin to trying to cope with his past mistakes, making him one of the more complex MCU characters.

Bucky hasn’t had it easy. After almost dying during the Second World War, he’s captured by Hydra and used as a puppet for decades to do their dirty work, resulting in memory loss and amnesia.

RELATED: 9 Memes That Perfectly Sum Up Captain America As A Character

When viewers are first reintroduced to Bucky in The Winter Soldier, he’s clearly just as confused as fans. He doesn’t recognize Steve, nor does he understand who he actually is. He spends the subsequent movies trying to piece back together his life, but not without confusion. His look of shock when Steve called him Bucky is one that’s spurred many memes which reflect the lost state of his mind.

Fans will know that Tony Stark and Bucky Barnes had a very turbulent and strained relationship. It’s revealed in Captain America: Civil War that Bucky killed Tony’s parents, under the control of HYDRA. Tony, in a rage fueled attack, almost kills him.

Tony is known for his quirky outbursts of comedic relief, but Bucky, on the other hand, not so much. Though they couldn’t be any more different, the two have a few things in common, especially their dislike of moving, ticking objects. This was one of the first glimpses fans got into Bucky’s personality, post-HYDRA, and many couldn’t pass the opportunity of comparing him to Tony. It’s a shame they couldn’t bond over their hatred for moving objects.

Bucky’s Struggle With His Therapist

bucky when his therapist trys to talk about his nightmares #FalconAndWinterSoldier pic.twitter.com/apZS5J4Gcu

In a surprising turn of events, it’s revealed in The Falcon and The Winter Soldier that Bucky is in therapy – state-mandated therapy, to clarify. Considering all the trauma he’s been through, it is probably a good thing that he can talk to someone about his past actions that he had little control over but feels guilty about it.

It’s also revealed that Bucky is not the ideal patient in therapy. He refuses to open up and repeatedly lies to his therapist about how he’s really feeling and is especially sensitive about his nightmares. When his therapist brings this up, he shuts down and tries to avoid the conversation. For being in therapy, Bucky seemingly doesn’t understand the point of said therapy.

Bucky And Steve Have A “Unique” Fighting Approach

Steve and Bucky have a lot of things in common, most notable their struggles to adapt to the modern world around them. Another similarity is their unique fighting style.

RELATED: 10 MCU Villains Memes That Will Have You Dying Of Laughter

Steve’s approach is a bit more reasonable than Bucky, given he throws his bike at the enemies – something he doesn’t need at that moment. Bucky, however, throws his entire body, in an unplanned attack. Hilariously, the two of them both have questionable fighting styles, despite being trained at the same time. Both of their approaches work at defeating the enemy and making viewers laugh at the same time.

Till The End Of The Line?

One of the most iconic lines from the MCU is Steve uttering to Bucky in The Winter Soldier while he’s trying to bring Bucky’s memories back. “I’m with you till the end of the line,” he says, in a final exhausting effort to help Bucky remember him, while Bucky is hell-bent on finishing his mission and killing him.

Despite this, Steve’s character arc ends with him abandoning Bucky and going back to the 1940s to live out his life with Peggy Carter, his first love. Fans have voiced their feelings on those, with some saying it was very out of character for Steve. Bucky, understandably, struggles to come to terms with this decision, especially after the promises Steve made him.

As one of the older characters, Bucky’s age is something that’s spoken about a lot. After revealing his age on a date, the woman assumes it’s a joke, resulting in Bucky’s trying to awkwardly laugh it off.

RELATED: Every Finale Of Every Marvel Show (So Far), Ranked

It’s clear at that moment Bucky’s got a lot running through his mind, his age weighing down on him. Bucky might be too old for a mid-life crisis, but he definitely has a crisis of some sort. It’s a funny moment but also a stark reminder of what he’s been through.

One of Bucky’s biggest struggles in the MCU to date is his failure to make meaningful connections in the modern world. Bucky, much like Steve Rogers, is a man out of time. Everyone he knew and loved is dead – something he is still struggling with.

Sam Wilson ended up being one of Bucky’s closest friends, a shocker to fans and Bucky alike. Bucky practically moves in with them at one point, in an endearing scene where he wakes up to Sam’s nephews playing in the living room next to him. Bucky opens up and finally accepts people in his life and receives everything he thought he had lost. It seems like a fair trade.

There are several hilarious interactions between Sam and Bucky in the MCU. One of the more memorable moments occurs in The Falcon and The Winter Soldier.

During an intense scene where Bucky is trying to explain his plan of attack, it’s revealed that Sam already knows what he’s planning and disagrees. This takes Bucky off guard, who tries to lie and approach the situation as a hypothetical, avoiding eye contact and trying to convince Sam he hasn’t gone against his wishes.

Bucky still has a long way to go. He’s only just starting to make amends for the crimes he committed under HYDRA’s control. It’s clear that he’s come a long way from the soldier who fans were first introduced to over a decade.

Bucky went from an assumed dead soldier to someone who’s found friends and seemingly found his footing in his new world. By the season finale of The Falcon and The Winter Soldier, he’s made progress in his friendship with Sam, enough so to be invited to the local cook out. The future’s looking bright for Bucky.