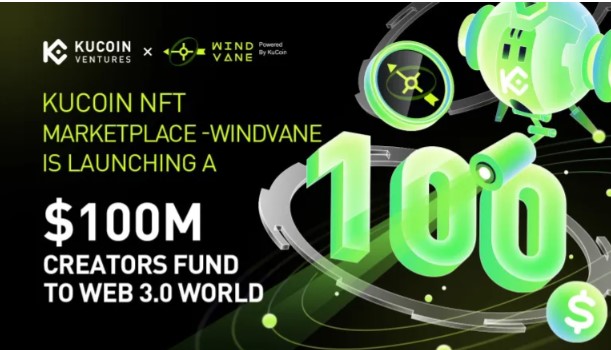 KuCoin, one of the leading cryptocurrency exchanges, announced that Windvane, with the support of the exchange, will launch a $100 million fund for the NFT space on April 19, 2022. This foundation will focus on NFT projects covering areas such as art, spot PFP, celebrities, GameFi. It is also stated that the fund will allow Web3 to join the Windvane NFT market to accelerate its growth. Here are the details…

KuCoin, a well-known cryptocurrency exchange, has announced a new step in relation to we3 and NFT. The exchange is launching a $100 million fund to support NFT projects or non-interchangeable tokens covering a wide range of areas. KuCoin will invite 99 leading NFT creators to join the Windvane NFT market, a brand new decentralized NFT market operating on the exchange.

Windvane is a platform that provides many services, such as NFT mining, trading, management, warehousing. The KuCoin NFT — Windvane trading platform will allow anyone to choose an NFT on the exchange and trade in Windvane. Thus, users will be able to access the main NFT blockchains by making purchases from a single point. The purpose of the exchange is to create a comprehensive and highly compatible platform that supports all networks.

By launching the “Creative Fund”, KuCoin is making a significant step in terms of its entry into the NFT space. Thanks to this fund, young artists and creators will have the opportunity to showcase their talents in an open, free, democratic and decentralized NFT market. In addition, the foundation will support many NFT projects to support NFT developments and the creation of the web3 world.

Windvane, ETH, BSC, FLOW, etc. It aims to create a comprehensive and well-compatible platform that will openly support major NFT blockchains, such as Windvane will offer support to help the exchange’s large user traffic and NFT Initial Offering (INO) projects. In his comments on this topic, KuCoin CEO Johnny Liu believes that at the current stage of the expansion of the KuCoin Web3 and NFT domains and KuCoin, the $100 million fund “will undoubtedly bring profit.” Liu uses the following expressions:

The $100 million Creators Fund will support the creators of NFT and projects that will further strengthen the infrastructure of the metaverse. I like the rapid development of NFT and sports, culture, games, celebrities, etc. We are glad to see its integration with the KuCoin NFT Marketplace — Windvane wants to bridge the gap between Web 2.0 and Web 3.0 by supporting more creators to launch their NFT or projects. Also, a more integrated NFT world that can provide fewer inputs to users.

Windvane, backed by KuCoin, will be the driving force of the industry

Justin Chow, investment director at KuCoin Ventures, an investment unit created to invest in interesting projects in the Web3 era, states that the KuCoin NFT Marketplace — Windvane is an emerging market, users are a priority, and they are community—oriented. That’s why he says they will support Web3 creators and developers to break new ground in NFT. Finally, he said that he was “glad to launch a $100 million Fund for Authors and become a Windvane partner.”

Windvane is a more open and inclusive decentralized NFT marketplace powered by KuCoin that will serve as a driving force in the industry. It aims to create a comprehensive and well-compatible platform for KuCoin that will support the main NFT blockchains. That’s why Windvane is committed to huge KuCoin user traffic and the support of industry leaders and communities to help INO projects.

FOMC Minutes Announced! How Will It Affect Bitcoin and Altcoins?