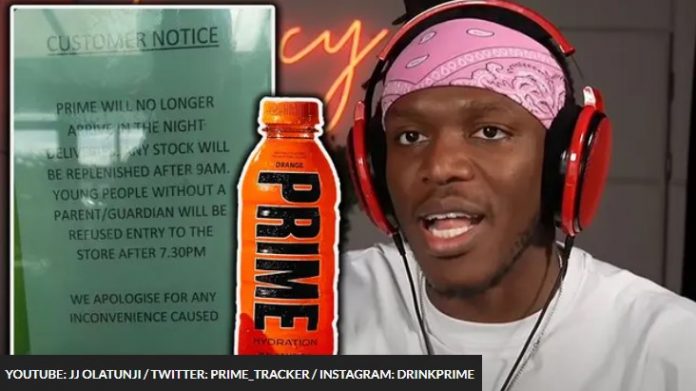 PRIME Hydration is a sports hydration drink created by YouTubers KSI and Logan Paul, which they officially released in January 2022.

Since its release, the drink has been a staggering success, selling out in stores across America and the UK, but British fans have recently found it particularly difficult to get hold of the famous drink.

Recently, KSI spoke out about the low supply of Prime in stores around the world, accusing store employees of selling the drink on the “black market” rather than storing it on the shelves.

At the moment, the only place where fans can get PRIME in the UK is ASDA… but one particular ASDA place isn’t exactly friendly for fans wanting to get their hands on a bottle or two.

ASDA store bans “young people” from Visiting stores because of the PRIME Hydration Craze
On October 20, the head of the Prime Tracker account on Twitter shared a photo of an ad on the ASDA store window, which prohibited “young people” from buying PRIME after 19:30 and claimed that the replenishment of PRIME stocks would occur in the morning.

“PRIME will no longer be coming in overnight delivery,” the notice says. “Any stock will be replenished after 9 am. Young people without parents/guardians will be denied entry to the store after 19:30.”

KSI was notified of the sign and posted a photo on Twitter with the quote, looking completely baffled by how this ban could have happened.

This is not the first time that a British institution has imposed restrictions on PRIME; in September, the school banned the use of this drink on campus, stating that the drink “will be confiscated if it is found or seen, and you will be punished with a fine of -3.”

At the moment, it looks like British fans will have to hold out a little longer until PRIME becomes more widely available — KSI has promised that this will happen soon.

Marvel Studios: Kevin Feige does not rule out Venom joining the...

Black Widow Was the Only Civil War Avenger Who Was Right