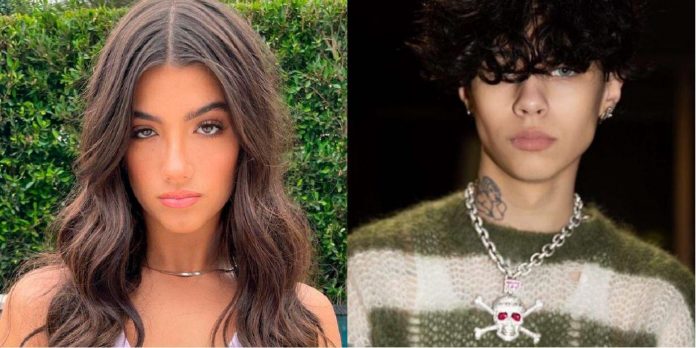 Recently married to The Kardashians star, Kourtney Kardashian’s stepson Landon Barker may start to shine from the reality TV star and his father Travis Barker after entering into his first celebrity relationship with TikTok star Charlie D’Amelio. Courtney and Travis recently returned from their wedding at a luxurious castle in Portofino, Italy. Their six children were present: Courtney’s three children by Scott Disick, and Travis’ three children by his ex-wife Shanna Moakler. Since Travis’ children were much older than Courtney’s children, it was easy for the founder of Poosh to establish a real connection with the Barker offspring.

In recent years, Travis has been the primary caregiver of his two children, Landon, 18, and Alabama, 16. The Blink-182 drummer also retains the role of stepfather to Shanna’s eldest daughter Atiana De La Hoya, 23. Travis’ ex-wife wasn’t happy when he started dating Courtney. Shanna couldn’t resist blaming the Kardashian family for the destruction of her family, including claims that Kim Kardashian was once Travis’ mistress. Shanna’s public statements didn’t help her already strained relationship with Landon and Alabama. Both teenagers made statements on social media, accusing Shanna of being an absent mom. Shanna only started behaving well after Travis proposed to Courtney last October.

Now, following Courtney and Travis’ wedding in Italy, their teenage son has made headlines for dating the most popular girl on TikTok. It is reported that the aspiring musician and fashion designer has sparked a romantic relationship with social media star and entrepreneur Charlie D’Amelio. “They’re dating and it’s early stages,” a source told People. In recent weeks, two 18-year-olds have been spending time together. Rumors about their relationship first surfaced after they were spotted at a Travis concert earlier this month. Fans were convinced that the two were dating after they both posted photos of tattoos made by the Los Angeles-based artist @ar.bel. Viewers also saw them leaving an album release party together for Charlie’s younger sister Dixie.

The new couple is a powerful force, and Charlie is one of TikTok’s most popular stars with over 142 million subscribers. Her influence on social media has helped her make big deals and get product approval. Charlie recently released her new perfume Born Dreamer. This is one of the many ways that a teenage sensation continues to make money at such a young age. Meanwhile, Landon is crushing the fashion world with his new collaboration with boohooMAN. He is proud of his attention to fashion, which, according to him, began in childhood thanks to his rock star father. “As a kid, [Travis] would always put cool old rock band T-shirts on me,” Landon said. But now that he’s older, his father respects his contribution to fashion. Landon says that if it wasn’t for him, Travis would just wear black Dickies with punk rock T-shirts.

While Kardashian stars Kourtney and Travis are used to the headlines, their children are now gaining fame for themselves. Since Landon is dating a popular TikTok star who has her own fame and fans, the teenager enters her first relationship with a celebrity. It’s pretty branded for the offspring of the Kardashian family. The growing popularity of Landon and Alabama may prove beneficial for the new Hulu show. Fans are likely to tune in for the opportunity to meet the Barker kids.

Call of Duty: Modern Warfare 2 Gets An Explosive Campaign Trailer,...