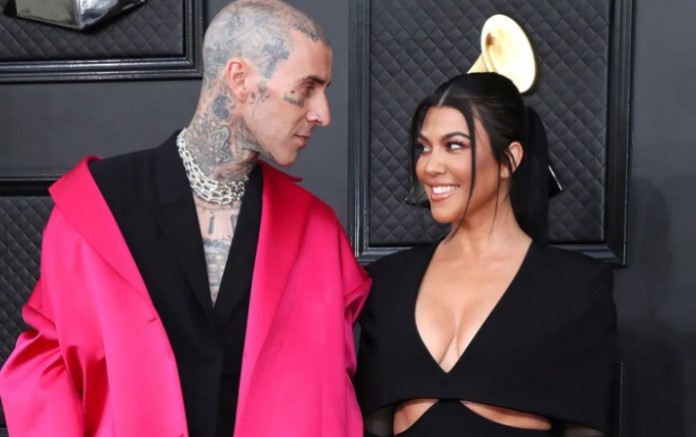 The future bride blushes! Kourtney Kardashian and Travis Barker are happier than ever after an impromptu love party in Las Vegas.

The 42-year-old reality TV star gave fans an idea of her state of mind on Thursday, April 14, by sharing a picture of a poster with the inscription “Happy wife, happy life” in her Instagram story. A link to a Poosh article titled “10 Easy Ways to Be Happy” accompanied the upload on social media.

“[There was] a lot of kissing and dancing,” One Love Wedding Chapel owner Marty Frierson told us. “It was very, very romantic. …The atmosphere was just love.”

Later, the lifestyle guru explained that she and the drummer had not officially become husband and wife. “Once in a far, far country (Las Vegas) at 2 a.m., after an epic night and a little tequila, the queen and her handsome king ventured into the only open chapel with Elvis and got married (without a license),” she wrote on Instagram on April 6, along with a slideshow of pictures from a small ceremony. “Practice makes perfect.”

However, the Keeping Up With the Kardashians alum had every intention of officially marrying the Blink-182 musician. “It’s not called a fake marriage,” she explained on Jimmy Kimmel Live! earlier this month. “At that hour it was not possible to get a marriage certificate. … We asked five times. “What do we need to do to make this happen?” It was 2 o’clock in the morning, and they said, “It opens at 8 o’clock.”

Kim Kardashian recalled learning about her older sister’s adventures in Vegas during the same interview, joking, “[She told us] like, ‘Oh, by the way, guys… I got married last night!” And I woke up, like, a million messages.”

Visiting the chapel was a “completely impulsive” decision, as a source told us, adding: “They will have a bigger celebration with more of their families, but it was a special night just for the two of them.”

Although the celebration came as a big shock to fans, Kris Jenner hinted to E! News that she “knew” about the Vegas ceremony and that she might end up in the new Hulu family series. “We made the wait worth it,” she teased before the Kardashians premiere. “You never know what’s going to happen.”

The reality show debuted on the streaming platform on Thursday, April 14, and Courtney’s personal life is presented in the spotlight. During the teaser of the upcoming episodes, Courtney hints that she and the “Meet the Barkers” graduate are ready to expand their blended family. The California native shares children Mason, 12, Penelope, 9, and Rain, 7, with ex Scott Disick, while Barker is the father of Landon, 18, and Alabama, 16, from ex-wife Shanna Moakler.

“Both of their children are just as excited about the possibility of having another brother and sister,” a source told us. “[Landon and Alabama] just want their dad to be happy, so of course they will fully support anything that makes him happy.”