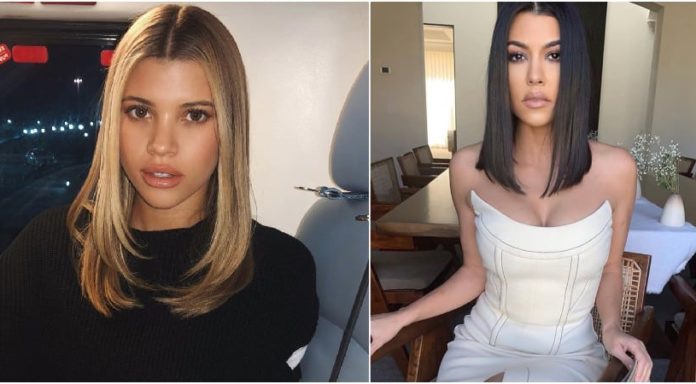 They were never friends. But there is war! Kourtney Kardashian and Scott Disick separated a long time ago. Since then, she has been in a relationship with the pretty 21-year-old blonde, Sofia Richie. The eldest of the Kardashian family does not like her at all!

Indeed, Kourtney Kardashian and Sofia Richie do not get along . The two young women are cold again! A relative of Sofia has also entrusted shocking revelations to our colleagues from Radar Online. She explains: ” Sofia has literally spent years biting her lip and managing Kourt’s attitude, but now she’s completely done with it.” In short, Kourtney spends her time belittling Sofia. She is sick of it !

KOURTNEY KARDASHIAN CAN’T STAND SOFIA RICHIE
Recently, however, the situation seems to have settled between Kourtney Kardashian and Sofia Richie . First, the best enemies went on vacation to Finland together. In addition, Scott’s girlfriend wanted to make peace. To get closer to her, the latter had followed Kourtney Kardashian on Instagram . But the elder Kardashian sisters did not want to do the same! So it got offended and unsubscribed. Once and for all !

Since then, Sofia Richie has wanted to distance herself from the Kardashian clan. Besides, she refuses to appear on their show ! According to the same source, Sofia no longer wants to be walked on by Kourtney Kardashian . ” She takes the initiative and announces that she will no longer be the victim of bullying or bashing,” she explains. Scott then asked his ex to calm down. The 36-year-old man reportedly told her “it was time to show respect and stop being so self-absorbed when they’re all together.” Will the tensions ease?

Joel Coen and Frances McDormand Talk About The Tragedy of Macbeth