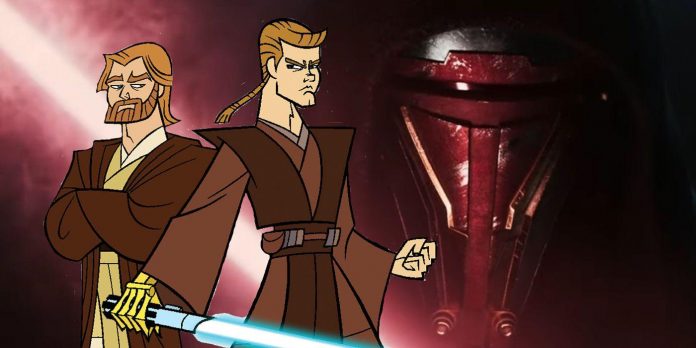 Fan art for “Star Wars: Knights of the Old Republic” reinterpreted Darth Revan in the style of the animated series “Clone Wars” in 2003. KOTOR is one of the most popular games in the Star Wars franchise. Originally released in 2003 for Xbox and PC, KOTOR introduced such iconic characters as Darth Revan, Kreya, Darth Malak and others. Although it is not considered part of the current Star Wars canon, the popularity of the role-playing game has led not only to KOTOR and its sequel KOTOR 2 receiving Nintendo Switch releases, but also to the development of a complete remake from Aspyr.
After months of rumors and speculation, the remake of Knights of the Old Republic was finally confirmed late last year by its developer Aspyr, a studio that ported the original games to Mac, iOS, Android and Nintendo Switch. It was announced that the remake is scheduled for release on PC and is a temporary console exclusive for PlayStation 5. So far, little is known about the KOTOR remake, including how big its changes will be compared to the original. But considering that this is a remake, not a remaster, it is likely that it will have some significant differences from the original in terms of visual effects and gameplay. Previous reports also claimed that a remake of KOTOR will be released in 2023.
Related: All Star Wars KOTOR Remake Changes the Canon of the Game Now
Reddit user NerdiconPrime recently shared his fan art on The Knights of the Old Republic on the Star Wars subreddit, and another CarterSevenFive user shared a little more on the KOTOR subreddit. The fan art features several iconic KOTOR characters such as Revan, Darth Malak and the Sith Triumvirate consisting of Darth Treya, Darth Nikhilus and Darth Zion. They are made in the artistic style of Gendy Tartakovsky, who created the 2003 animated series “Clone Wars”, as well as other shows such as “Dexter’s Lab” and “Samurai Jack” and many others. According to CarterSevenFive, the art is part of a larger fan animation project called “Star Wars: Scars of the Old Republic.”
The action of the animated series “Clone Wars”, which began airing in 2003, takes place between the films “Attack of the Clones” and “Revenge of the Sith”. an army of clones that worked closely with the Jedi. In addition, the series featured several characters who would later be featured in films, such as General Grievous and Commander Cody, as well as Count Dooku’s apprentice, Asajj Ventress.
NerdiconPrime’s fan art definitely looks impressive, and the fan animation project is very similar to the successor to the Clone Wars animated series, albeit unofficial or canonical. We hope that NerdiconPrime and the rest of their team will continue working on their project and will share new images of the characters of “Star Wars: Knights of the Old Republic” in the style of the “Clone Wars” of 2003.