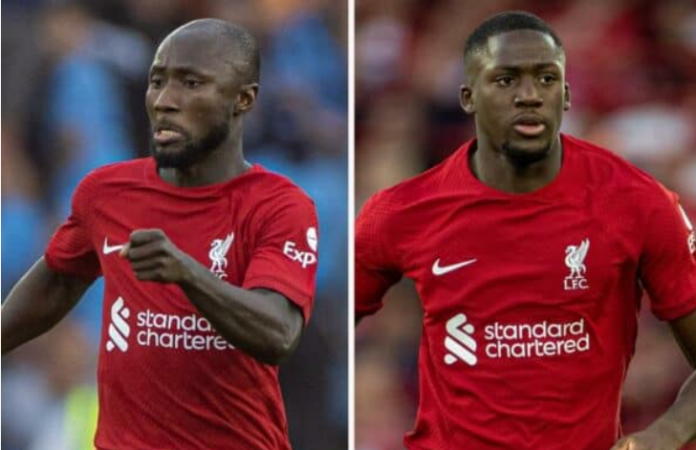 Jurgen Klopp has provided an update on the injuries of Naby Keita and Ibrahima Konate, who are due to return to full Liverpool training next week.

During a relentless string of matches, Klopp carefully monitors the physical form of his team, despite a long list of injuries.

Fortunately, the situation is improving by the game: Curtis Jones and Alex Oxlade-Chamberlain are back in the ranks, and Keita and Konate are not far off.

Anticipating Liverpool’s trip to Nottingham Forest in the Premier League, the manager confirmed that the former RB Leipzig duo should report soon.

“From Monday, Nabi and Ibu, if everything goes according to plan, will participate in full—fledged team training,” Klopp explained.

“It means that from there we count the days or something like that.”

Konate will probably return to wrestling again after a short break due to a muscle injury, but a longer training period is planned for Keita.

“His pre—season, if you like, the football pre-season starts around then,” Klopp continued.

“He was really absent for a while, as was the Bull. Oks was on the bench, I don’t think I’m ready to play in our last game, but he’s getting closer.

“Thus, he is one or two weeks ahead of Nabi, which is also very useful for us.

“But the situation with Nabi is clear. Whatever happens in the summer, no one knows at this moment, but now it’s about making it as fit as possible so that it can withstand a huge number of upcoming games.

“There are a lot of football matches and I can’t wait for him to come back properly.”

As Klopp hinted, Keita’s contract will expire in the summer, and negotiations on an extension are still inconclusive, but he is not focusing on the situation with the midfielder.

Instead, the priority is for Keita to be “in the best possible physical shape,” and he is expected to be back in action before the World Cup, which starts on November 20.

“It’s not a pre-season of five or six weeks,” he added.

“The fact is that in the rehabilitation center with these severe muscle injuries, we can do anything except team training. So you can’t replace team training.

“They play football, they run more than we do in training because they have to, but without rehabilitation you can’t replace football training.

“If it’s a small game or something like that, it’s a completely different intensity compared to anything you can produce in rehab.

“That’s why I’m talking now about the football part of the pre-season starts, when physically he could probably run a marathon now when he starts on Monday, but it’s useless because he needs to do other movements.

“As long as we can give the boys time to fully recover and get in shape, we always try to do that.

“The problem is that when you start the season with injuries, the guys who come back very often have to play too early because there are no other options.

“In that case, I hope we can do it now, that we can give him time until he can play, but maybe next week I’ll tell you, ‘Naby Keita starts.’ I don’t know, we’ll see.”

Matty Healy on The 1975 as a group of “post-Arctic monkeys”.