Home Entertainment Klopp Is Now More “Practical” With Transfers Amid The Departure of Ward... 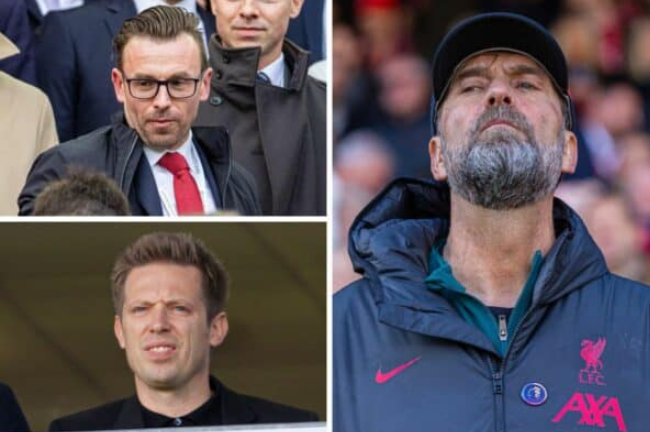 After news broke on Thursday that Julian Ward was stepping down as Liverpool’s sporting director, it emerged that Jurgen Klopp is playing an increasingly “hands-on” role in recruiting players to the club.

Having replaced Michael Edwards only in the summer, Ward’s resignation came as a big surprise during an increasingly uncertain period of time for Liverpool.

The owners of Fenway Sports Group are offering offers to the club, and Mike Gordon has stepped away from his role to focus on a possible sale.

Paul Joyce of The Times provided more details on Ward’s impending departure, saying he told FSG he was leaving to “take a break from football” and club officials are confident he won’t leave to take up a similar role elsewhere.

It is also reported that Klopp has “occupied an increasingly important place” in the club’s transfer policy over the past 12 months.

According to Joyce, it was the Liverpool boss and his staff who insisted on signing Luis Diaz from Porto to prevent him from joining Tottenham in the middle of last season, and it was also claimed that Klopp “fell in love” with Darwin Nunez when the Reds played Benfica in the Champions League.

A major reshuffle in Liverpool’s recruiting team seems ill-timed, given that Klopp is in the process of strengthening most of his playing squad, and next year’s transfer windows are likely to be key.

And Joyce reports that the German is playing an integral role in rebuilding his team, while FSG does not believe that Edwards’ departure will affect their plans for upcoming transfers.

He also adds that Liverpool “will now evaluate the best model for supporting football operations in the future.”

Jude Bellingham is a household name when it comes to Liverpool’s potential transfer targets, and Joyce hints at the Reds’ interest in the England midfielder, adding that reaching the top four will be crucial if they have a chance to sign him.

Elsewhere, GOAL’s Neil Jones reported that there is a belief at the club that FSG’s “spend what you earn” ownership model is “coming to the end of its shelf life.”

Legacies: What Julie Plec said after the cancellation of the spin...