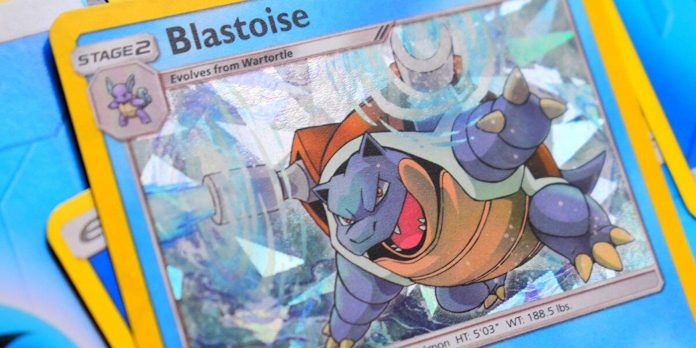 The Pokémon Trading Card Game experienced a popularity surge throughout the pandemic, resulting in skyrocketing prices and unfortunate swindles for first-time buyers, with fake cards and scams taking advantage of the unwary. Fake cards in trading card games aren’t a new occurrence; many scammers sell forged, rare cards or faulty packs without their full contents. While scammers are constantly developing new ways to generate profits from less-informed collectors, it’s important to remember the various risks of purchasing fad items. With new Pokémon collections releasing throughout the year and the values of different cards rising and falling, the amount consumers are willing to pay (and the amount fans are willing to put up with) varies with them. Thankfully, there are many ways to tell if online purchases or third-party trades are trustworthy and legitimate.

Pokémon TCG contains countless collections of base sets and expansions that correspond with every core series generation and game. The rarest cards usually feature alternate or full art (different, rarer depictions of a specific monster in the collection) and come in foil versions that raise the card’s value. Third-party websites often set the price of different cards and track fluctuating card values in base sets or expansions. Unfortunately, the value of these cards only becomes valid once players obtain legitimate versions of the desired Pokémon. Spending significant funds on faulty sets or fixed booster packs can be terrifying, but fans shouldn’t obsess over each package they purchase.

Fake, expensive Pokémon TCG Trainer Boxes, booster packs, and expansions aren’t as common as some fans think, and players should rarely fear purchasing a phony card from a retailer. Many stores don’t allow the return of Pokémon card purchases (or any playing card purchases), and employees often do not have the resources on hand to re-seal packs without being caught by management. Furthermore, the Professional Sports Authenticator is responsible for officially grading the status of different cards and detecting duplicates during examinations. As a rule of thumb, fans should purchase single cards from listings with confirmed PSA ratings, with a higher rating reflecting a better condition.

How To Spot A Fake (Or Compromised) Pokémon TCG Booster Box

Pokémon Trading Card Game booster boxes ship with 36 booster packs and are extremely valuable for collectors and players. Purchasing a booster box through retailers or online subscriptions usually results in a better deal per booster pack, which typically run for $4 or more depending on retailers. Unfortunately, many players and fans are drawn to purchasing booster boxes by the dozen, with some being on the receiving end of scams. Thankfully, there are a few ways to determine if a Pokémon booster box has been compromised. The first concerns the shrink wrapping around the cards: Customers should always ensure that the Pokémon logo (featuring the name ‘Pokémon’ across a Poké Ball) covers the product on the actual shrink wrap itself. The logo is usually white and can appear up to eight times, depending on how shippers (or machines) wrap the individual box. The shrink wrap should also be sealed completely, with no holes.

An obvious tell that a retailer – like Wal-Mart or Target – Pokémon TCG booster box is fake (or has been tampered with) is damage to the packaging. Crumpled boxes or misarranged booster packs inside should raise an immediate red flag. Discussing the issue with an employee or manager could explain the situation, but online purchases in such a state should be regarded with extreme suspicion. A picture of the damaged box upon delivery could allow the consumer to file for a return if a policy is in place at the vendor of choice. Fans can also determine a booster box’s legitimacy by the booster packs’ placement: Each pack should be stood upright, and there should be an even number of packages on each side. Collectors can eliminate doubt by recording themselves opening the box and confirming the date, just in case cards are fake inside.

How To Tell If A Pokémon TCG Card Is Fake

The rarest and most valuable Pokémon cards are some of the most commonly reproduced, meaning Charizard, Pikachu, and legendary Pokémon are the most liable to be faked. Recent valuable additions to the Pokémon TCG may also be faked, such as the recent GMAX and DMAX cards from Pokémon Sword and Shield’s base set and expansions. While scammers are constantly changing tactics to swindle Pokémon fans, many reliable methods exist to detect fake cards. Most of these strategies depend on consumers having access to a verified card and familiarizing themselves with its layout, colors, and terminology. If all else fails, fans should trust their guts when determining which cards are real or not, and assume questionable cards are fake until proven otherwise.

Since Pokémon Trading Card Game scammers and forgers depend on making profits with the least amount of effort, leading to noticeable mistakes across many mass-produced fakes. Incorrect Pokémon names, types, elemental symbols, grammatical errors, or the use of Pokémon without the accent (Pokemon) can all give away a fake card. However, not all counterfeit cards feature grammatical mistakes, and a scammer with knowledge about the franchise can execute a convincing fake. Players must also pay attention to the card’s alignment and color scheme. Having a reference card to judge whether a card’s contents are centered or are the correct color can make this much easier. When purchasing a card from an independent merchant, it’s best to ask for an updated image before finalizing a purchase rather than referencing the listed picture.

The most valuable Pokémon cards can cost buyers several thousand dollars, but the price of certain cards can also be a red flag. Legitimate purchases can be determined on TCGPlayer’s website, while potential customers can compare prices on sites like Amazon or software like Honey. Additionally, a card’s cost should depend on its PSA (Professional Sports Authenticator) rating, and cards lacking this designation in online listings should be abandoned swiftly. It’s simple to falsify photographs of cards and sell multiple “copies” of rare Pokémon to consumers, and scammers’ eyes are often larger than their brains. Taking advantage of the various resources at one’s disposal can help consumers avoid purchasing a costly counterfeit.

With more Pokémon TCG expansions releasing every few months, collectors, players, and fans must keep on their toes for scammers. Choosing to purchase rare cards cautiously through legitimate websites or retailers can greatly increase one’s chances of obtaining legitimate cards. There are also many online forums and videos where Pokémon TCG community members assist others in avoiding scams. Properly researched Pokémon TCG purchases and informed fans can easily avoid scams, and it’s always safe to verify legitimacy before finalizing transactions.