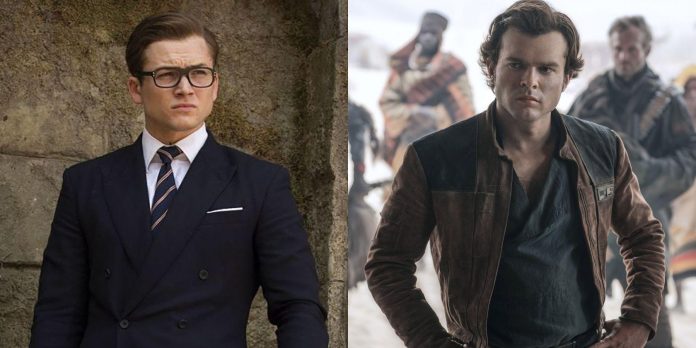 Kingsman and Rocketman star Taron Egerton revealed in a recent appearance on the Happy Sad Confused podcast (via Entertainment Weekly) that he was running for the role of Han Solo in Solo: A Star Wars Story, despite previously denying there was any truth to it. hearing. In a conversation with host Josh Horowitz, the Welsh Golden Globe winner explained that he refused to participate in the competition for this role.

Speaking frankly about the process, Egerton said that he even got on the “Millennium Falcon”. “To be honest, I got on the Falcon. I was with Chewie. I was in full costume, I felt like I got there, I did it, I lived it.” This revelation stands in stark contrast to his denials back in 2016, when he was promoting his film “Eddie the Eagle.” Speaking on the Jonathan Ross Show in 2016, Egerton said: “It’s very, very flattering. I have no idea if this is true, but I mean, Lucasfilm, Disney, if there is, then you know where I am.”

Even at that time, many did not quite believe Egerton’s denial, since his photoshopped photos appeared all over the Internet in his characteristic and favorite Solo costume. When asked why he decided to show how close he was to playing a major role in the project, Egerton replied: “It’s already far enough in the past, and I feel like I can say it, I hope no one is annoyed that I said it.” It turns out that Egerton eventually decided that the Solo role was not suitable for him, saying that “I just didn’t feel it.”

Edgerton recently revealed all his secrets, telling The New York Times that he had conversations with Kevin Feige about taking on the role of Wolverine sometime in the future. Once again, Wolverine was a role Egerton had long been considered by fans, with mock-ups of the actor in yellow spandex and branded claws appearing online almost immediately after Hugh Jackman announced he was retiring from the role.

Like Jackman, Egerton is also a singer and voiced gorilla Johnny in the movie “Sing and Sing 2”, and also won a Golden Globe as Elton John in the 2019 movie “Rocketman”. Egerton and Jackman even worked together on the movie “Eddie the Eagle”. Despite the fact that Egerton eventually turned down the role of Khan and is only on the radar to take the claws of Adamantium Wolverine, it must be flattering that he is being considered for such iconic roles. Currently, Egerton can be seen in the mini-series “Black Bird”, and he also plays a major role in the upcoming film adaptation of Tetris.

The screening of the film dedicated to the 40th anniversary turned...

Octopath Traveler: Champions of the Continent pre-registration is already available for...