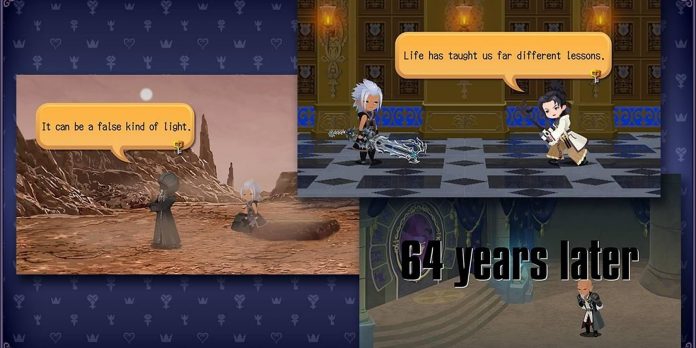 Square Enix first announced the closure of Kingdom Hearts: Dark Road more than a year ago. Since then, only a few updates have been made to the game, and the release date of the plot ending of the game, as well as the launch of its offline version, had to be postponed several times. Both Dark Road and its predecessor Kingdom Hearts: Union X are still part of the Dark Seeker saga from the role-playing game series and have important connections to the main plot of Kingdom Hearts. This is probably why Square Enix decided to keep both games active in offline versions of games.

In a recent tweet, Square Enix announced that the offline version of Kingdom Hearts: Dark Road is now available for download on iOS and Android devices. This update also includes the final update of the Kingdom Hearts: Dark Road plot. According to the version history of the game in the Apple Store, version 5.0.0 will be officially discontinued, and players should not expect support from the company for the recently released standalone version.

Some commenters of the announcement on Twitter asked how they could access the offline version of the game or whether they needed to restart their progress in the game. Unfortunately, Square Enix did not share instructions on how to save players’ progress when Kingdom Hearts: Dark Road switched to the offline version, although there is an old post in which players are asked not to delete the app on their devices in order to save their data.

As Square Enix prepares to release its new mobile game Kingdom Hearts: Missing Link, it is clear that the development team is abandoning Kingdom Hearts: Dark Road. Although the offline version of the game may no longer have support from the team, the ability to access the title and its history even after the end of service is likely to be appreciated by both old and new fans of the Kingdom Hearts series.

PUBG MOBILE turns 3 with content from Godzilla Vs. Kong