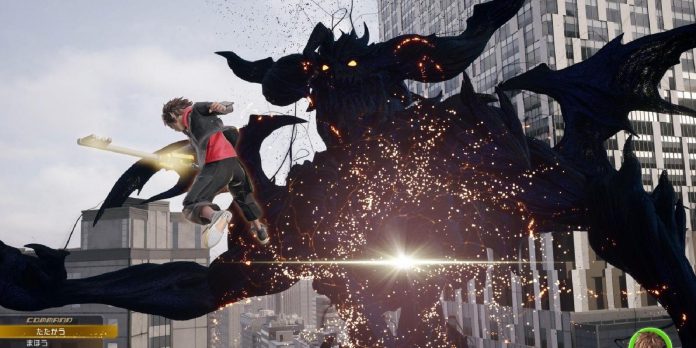 Among the older features and mechanics from the early games, one that many fans have wanted to see return is the Tech Point system from the original Kingdom Hearts. With the combat of the series becoming more complex and faster paced, this could make a huge impression on players if Kingdom Hearts 4 also adopts the Tech Points alongside Reaction Commands.

The Tech Point system has only ever appeared in the first game in the series, quickly being dropped as Kingdom Hearts continued with combat that gave new ways to reward quick reactions. What this mechanic did was reward extra experience to Sora any time the player managed to land specific types of attack on enemies. This is usually activated whenever parrying an attack with Sora’s Keyblade, although some bosses had certain weak points that would also reward a few experience points for hitting in specific ways.

One of the most notable examples from early on in Kingdom Hearts was the way that Wakka’s blitzball could be parried back at him when challenging him to a fight on Destiny Islands. In this case, the player would not only be rewarded with the extra point of experience, but succeeding at the right distance could leave Wakka vulnerable to a follow-up attack. This is a trend that persisted with most of the parries that would result in a Tech Point, usually stopping an attack and leaving the enemy momentarily open for a counter.

How Later Kingdom Hearts Dealt with Reacting to Environments

As the pace of combat began to increase in Kingdom Hearts 2 and every subsequent game since, reacting to enemy attacks became less about being able to parry and began to rely on more environmental factors. First, there were the Reaction Commands that led to some criticism for Kingdom Hearts 2, even if fans now complain that these commands didn’t make it into Kingdom Hearts 3. These would usually take the form of a command attached to the Triangle button that would do a situational attack based on the specific type of enemy and the attack being countered.

After that initial criticism of the Reaction Commands in Kingdom Hearts 2, the system was removed from many future titles, with reactions eventually being put into the Flowmotion system from Dream Drop Distance. This wasn’t necessarily as reactive to enemy attacks as either Tech Points or Reaction Commands were, but they did have specific effects based on both the environments and the specific enemies in the area. However, with Kingdom Hearts 4 bringing back the more reactive gameplay of the Reaction Commands, the more subtle rewards of the Tech Points could be more welcome to return than ever.

RELATED: Kingdom Hearts 4: How Sora Has Changed Since the First Game

How Tech Points Could Improve Combat in Kingdom Hearts 4

More than anything, Tech Points previously acted as a reward system that would confirm whether certain strategies were even viable in combat. The question of if it was better to hit Riku’s sword or just dodge it was answered not only by him flinching backward and opening up, but by a little icon that would flash up and say “1 Tech Point” in order to send off that little dopamine kick. Now with the skill window of players being better tested with fights against enemies like Yozora in Kingdom Hearts 3, this type of in-the-moment risk and reward would be welcome for players more familiar with the series’ combat.

Given how much the monster-sized Heartless bosses have grown in the most recent titles, the secondary effect of Tech Points could also shine, drawing players to attack an enemy’s weak points. This worked in the first Kingdom Hearts to show that players could reach up and hit the giant Darkside boss on the head, usually in the moments when it leans towards the ground, but also by jumping on its shoulders to get extra experience. With a remodeled Darkside shown off for Kingdom Hearts 4 already, this could be a great chance to include Tech Points as a way to call out weak points with a callback to the original game.

Other Older Mechanics and Features that Should Also Return

It’s been mentioned before that Kingdom Hearts 4 could bring Drive Forms back as well, most notably as a “get out of jail free” button when in a dire situation. However, there are some other core concepts that could be interesting to see return in the next game in the series. One aspect that many players have hoped to continue on past the original Kingdom Hearts is the platforming, with movement abilities that allow for increased traversal as the player progresses through the game.

With over 20 years of Kingdom Hearts to pull from, there’s plenty for Square Enix to consider when it comes to integrating older systems into Kingdom Hearts 4. That being said, the most impressive part of each new title is seeing the ways that combat and exploration improve with each title. So, as nice as it would be to see fan-favorite concepts return in Kingdom Hearts 4, players should be even more excited to see the progress of the series rather than how it can backtrack.