Home Entertainment Kimetsu no Yaiba is back with Season 2! And so they expanded... 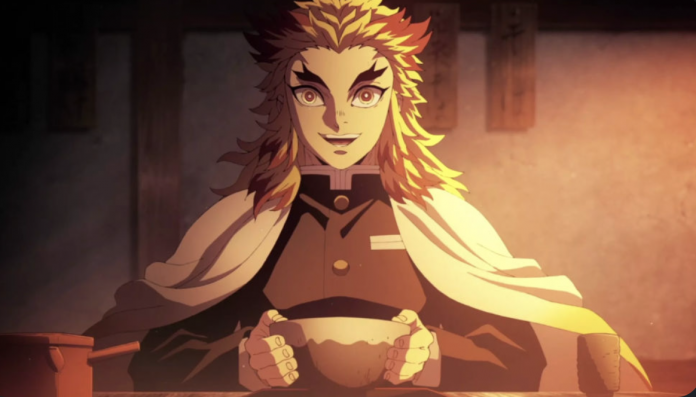 Before adapting the Kimetsu no Yaiba film, a previous episode centered on Kyojuro Rengoku, the Pillar of Flame.

As anticipated long ago, the first episode of the second season of Kimetsu no Yaiba premiered over the weekend. Likewise, and as it was revealed before, it was a completely new one, but related to the first film in the series.

In this case centered on the Pillar of Flame, Kyojuro Rengoku. The ufotable studio decided to get creative and gave us a pre-event story for this popular film.

This is how we had the opportunity to take a look at the life of this character and some new characters entered the scene. In passing, it served to explain how Rengoku had so many bentō in his possession, which he ate with great enthusiasm.

As could be expected from ufotable, the episode was very well animated and entertaining. The infamous Mugen Train or Infinity Train also appeared, but it was not as relevant.

This first episode of the second season of Kimetsu no Yaiba allowed us to learn a little more about Kyojuro Rengoku and his way of being. There was even a brief background on the legacy of his family, especially his father.

Characters like Tanjiro Kamado, Zenitsu Agatsuma, and Inosuke Hashibira didn’t appear as much as some would like. But there was not much of a case for it to be so. This trio followed another route to get to the train station.

A new story in the Kimetsu no Yaiba anime

This Pillar of Flame adventure even has its own demon as its main enemy. Someone so fearsome that he killed and devoured 40 people. However, it was thanks to his experience and expertise that the Pillar of Flame came forward.

But he was aware that the Infinity Train had another hidden threat and that was why he decided to go up to end it. At the end of the episode, Tanjiro, Zenitsu, and Inosuke can be seen boarding this railway.

There are also characters that will have relevance throughout the Demon Slayer film Kimetsu no Yaiba The Movie: Mugen Train. In how many episodes will the story of this film be told? There will be six in total and when they finish broadcasting, a new arc will begin.

But that will be later, until December 5 of this year. Tanjiro Kamado and his friends must face a strong and very powerful enemy in this new saga.