Kim Kardashian’s daughter is very manual. The girl has set up her own cabin. A beautiful construction that the influencer wanted to share with her community.

In the Karadashian-West family, we ask for North. At just 6 years old, Kim and Kanye’s daughter is already very tall. Passing through Paris to accompany her parents during Fashion Week, the little girl caused a sensation.

Indeed, during the parade for the brand of her dad, Kanye West, North therefore took the microphone and sang a song in front of an audience. Meanwhile, the models paraded to present the new collection of the Yeezy brand.

And it’s far from the first time North has spoken on stage. The West’s little girl once sang at the Sunday Services led by her dad, Kanye. She also had the privilege of singing songs with Kanye West at school at a public event. What a notch.

SINGER, DIYER… HIDDEN TALENTS OF NORTH WEST!
If North doesn’t have an Instagram account to share her adventures, she can count on her mom. Indeed, Kim Kardashian regularly post photos and videos of her daughter. And the latest one may surprise you.

If we knew North for her singing talents , we certainly didn’t know her as a handyman. Using Amazon boxes, the girl created a cabin for her mom and dad. Inside, there is a doll bearing the image of Kim Kardashian and another for Kanye West.

The influencer then commented : “Here is the house built by North. She created a room for Kanye and me. There are even windows so that we can see the light of day, ” she announced before leaving with a laugh. Well done North! 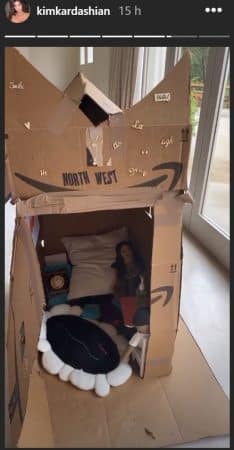