Home Celebrity Kim Kardashian offers a gift of 60,000 euros for her daughter North! 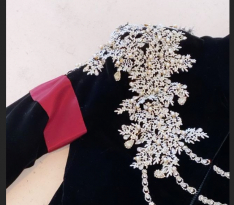 Kim Kardashian is ready to do anything to please her children. Especially her first baby North who already has adult tastes!

Nothing surprises us in this family! It must be said that none of the sisters looks at the expense for her children. This is the case of Kylie Jenner or even Kim Kardashian! We explain to you!

Indeed, it would seem that everyone is fighting to make the most impressive gift possible. For example, Kylie Jenner’s daughter Stormi received a home. As for Kim Kardashian, she hasn’t looked at the price tag for her daughter North. However, the young billionaire Kylie is unbeatable in terms of spending. Her daughter Stormi barely walks when she can already boast of having a house all by herself.

On the side of the other brothers and sister the gifts seem more normal. They are much more expensive than average, but less impressive than those of Kylie. In any case, the children have nothing to complain about in this family. All have a crazy wardrobe, starting with North who already has very beautiful pieces for his young age! When we have such stylish parents of Kim and Kanye West, we have to!

KIM KARDASHIAN GIVEN A GREAT GIFT TO NORTH!
North can thank his mother Kim Kardashian for this gift she will love because she is a fan of Mickael Jackson. It’s a velvet jacket from the King of Pop, something the star herself wore for Elizabeth Taylor’s 65th birthday. A gift that will have cost 60,000 euros according to Télé-Loisirs. Not sure the jacket is already going to her, but she can wear it in a few years!

In addition the jacket was lined with photos of Mickael Jackson wearing the jacket. This is a rare and unique piece that could have a place in a collector or museum. “She is so grateful and excited,” said Kim Kardashian in her Instagram story. We hope that at this price she realizes how lucky she is! Fortunately, Christmas arrives once a year!