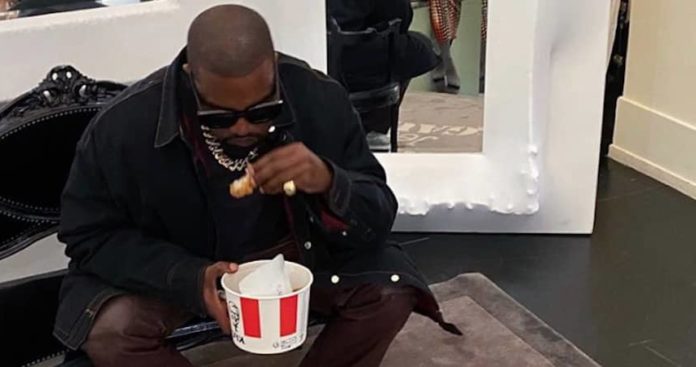 Kim Kardashian and Kanye West took advantage of their trip to Paris to stop at the KFC. At the end of the day, the brand dedicates a bucket to them!

Kim Kardashian and Kanye West love KFC. To their delight, the brand dedicated a chicken seal to them, just for them .

Masterful publicity stunt for KFC. While Kim Kardashian and her husband Kanye marked the halt in the Strasbourg-Saint-Denis fast-food restaurant, the restaurant chain dedicated a personalized message to them on Twitter . Indeed, Kim K and Ye are passing through Paris. For the occasion, they couldn’t help but bite into a crispy chicken leg … Despite Kim K.’s vegan diet

After buying a bucket and a fries, Kim Kardashian and her husband had lunch on the seal , in the premises of Jean-Paul Gautier. This was in contrast to the chic decor of the place. On Twitter, KFC France tweeted a message addressed to the iconic couple. “Hey, we created a bucket for you, inspired by our favorite song from you. For the next time you share the buffet at KFC Paris, “ tweeted the brand.

Hey @kanyewest @KimKardashian we created a bucket just for you inspired by our favorite song of yours. For the next time you’ll come split the buffet at KFC Paris… pic.twitter.com/qy9ikhl7Aq

In the photo of this Tweet signed KFC, we see Kim Kardashian and Kanye West commander at the car terminal. Next to them is the said bucket, which reads: “Me and my girl split the buffet at KFC” . A reference to Kanye West’s Touch the Sky . However, the couple’s little visit to this fast-food restaurant in the 10th arrondissement of Paris frightened the Web. In any case, “it went well , ” says the assistant manager of the restaurant at 20 Minutes :

“We wondered what they were doing in Strasbourg Saint-Denis. Customers were taking a few photos and videos, but the same, they looked surprised. We sometimes have a few stars, but clearly not at this level . ” Then, the owner of the KFC added that the husband of Kim Kardashian had trouble taking the order on the terminal … To the point where an employee had to take care of it: “My colleague who was in speed did not have them immediately recognized ” .

Kim and Kanye at KFC