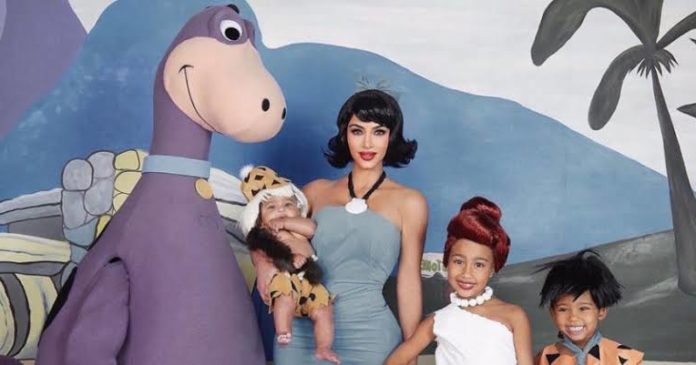 Each year, the Kardashian Jenner family is original when Halloween arrives. Indeed, moms do not hesitate to disguise their children with original costumes. But they also like to get along with their little ones. This is the case of Kim Kardashian. Indeed, this Friday, November 1, she posted several really amazing photos on her Instagram account with Kanye West.

Kim Kardashian took the pose with all her small family. And they opted for a disguise on the theme of the Flintstones. A very good idea. Their subscribers have also validated 100%. They loved the concept. The mother is disguised as Betty Bubble. Kanye West in Dino. Saint in Fred Flintstones. North in Wilma Flintstones. Chicago Nugget Flintstones. And Psalm in Bamm-Bamm Rubble. Almost all members of the famous series are gathered.

KIM KARDASHIAN AND HIS FAMILY TRANSFORM IN PIERRAFEU AND RUBBLE
And as a legacy of her Instagram photo, Kim Kardashian also wrote, “This family photo was a real challenge. Because Chicago was so scared of Dino! LOL We tried to explain to him that it was just daddy. But she has not yet understood the concept! So thank you to the photographer for modifying it. And to have made our family, the dreams of Flintstones, a reality! ”

With her shot, the reality show candidate also collected more than 4.3 million “likes” in five hours from her fans. And in the comments, they have not failed to compliment the family. They clearly caused a sensation on the Web. It remains to be seen whether next year they will have an idea as crazy and original for Halloween. Fans are already looking forward to seeing them disguise. Khloe Kardashian has opted for a 101 Dalmatian decor!

This family pic was such a challenge because Chicago was so scared of Dino! LOL We tried to explain and show her that it was just daddy but she didn’t get the concept yet! So shout out to the photographer for editing her in & making our family Flintstones dreams come true!