Home Celebrity Kim Kardashian: her children make up like the clown of It! (PHOTO) 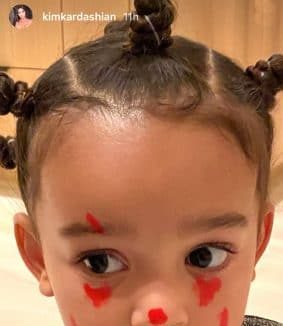 In Kim Kardashian’s family, make-up is sacred! In fact, from an early age, children are creative with mom’s lipsticks.

Small of Kim Kardashian are ready to take over. Yesterday, Kanye West’s wife shared very touching photos of her children on her Snapchat account. In these pictures, we can judge the artistry of North. The little girl of 6 years tried makeup by wanting to transform her brothers and sisters into a clown. Besides, it is not just any clown, but the horrible Pennywise of the Stephen King universe!

On social networks, Kim Kardashian therefore wanted to share the experience with his fans and prove to everyone that his daughter is very talented. Indeed, she announced: “So North decided to try to make a makeup like the Clown of It,” before showing the final result. A result as beautiful as cute!

KIM KARDASHIAN MOVED BY THE CREATIVITY OF HIS CHILDREN!
Kim Kardashian first showed the face of Chicago. The little girl, 2 years old, had her face covered with red lipstick , just like Souppe-sou. Indeed, red lines went up along his cheeks to cross the eye and stop above his eyebrows. On his little nose, a slight point underlines the peculiarity of the clown. North, meanwhile, adopted the same style as her little sister while “adding blood to her.” ”

Subsequently, Kim Kardashian shared several photos of Saint’s makeup. Thoroughly in his role, the 4-year-old boy posed in horror film mode, revealing the talents of a future actor. Unfortunately, the fun session ended with a trace of lipstick on the star’s sofa…

See Also
Kim Kardashian and Kanye West: Why their couple has not always been unanimous

Bella Hadid: she appears in an ultra transparent jumpsuit!