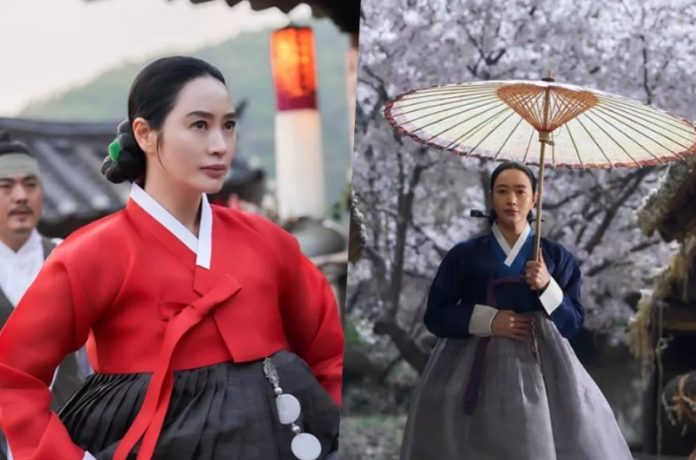 Kim Hye-soo presented her role in The Queen’s Umbrella! tvN’s upcoming historical drama “The Queen’s Umbrella” is dedicated to the Joseon Dynasty’s special palace education system. The drama will follow a conflict in the palace over an attempt to make real princes out of five troublesome princes who cause the royal family nothing but headaches. Kim Hye-soo will star in the drama as Queen Im Hwa-ryong, the wife of a great king and the long-suffering mother of five troubled sons.

This will be Kim Hye-soo’s first historical project in almost 10 years after she starred in the 2013 film “The Face Reader,” and her first historical drama in two decades after appearing in the 2002 drama “Jang Hee-bin.” The actress shared: “Although she wasn’t a real figure or a [role] that is usually seen in historical dramas, Hwa Ryong instantly won my heart. The reason why I chose the Queen’s Umbrella is clear. I chose the Queen’s Umbrella project because it is a new historical drama, with an interesting plot and because of the strength of my character.”

Introducing Hwa Ryong to Them, Kim Hye Soo commented, “Hwa Ryong is a woman with a strong power of love and a character who happily blocks and gets caught in the rain and wind to protect those she loves.” She clarified: “Unlike other queens we have seen in typical historical dramas, she is a character who behaves actively and clearly conveys her intentions and emotions. To the point that she is considered “the person with the fastest legs in the palace.”

Continuing to describe her character, Kim Hye-soo remarked: “Hwa Ryong, who follows the rules without being old-fashioned, is more perceptive than anyone in her generation and is incredibly intuitive but cautious. In addition, she is bolder and moves faster than anyone else. On top of that, she even has a wit. This image of Hwa Ryong appears in different scenarios in each episode.” She proudly added with a laugh: “There has never been such a queen before! The busiest mother of the nation and the fastest queen that everyone will see for the first time.”

Kim Hye Soo shared: “I believe that the greatest strength of acting is sincerity. Nothing has changed when I play the role of Hwa Ren. I act by focusing on the direction in which her sincerity as a queen, mother and woman should move.” Then she shared: “Since this is a historical drama, there is a limit to the visual differentiation that can be made. However, there is a golden hairpin with the image of a powerful dragon, symbolizing Hwa Ren.”

Most of Kim Hye-soo’s role will be in her battle with the Queen Dowager (Kim Hae-suk), who is also her mother-in-law. “This is my first meeting with Kim Hae-suk after the movie “Thieves”. Although this is a confrontation between mother-in-law and daughter-in-law, a simple description of the conflict is not suitable for our drama. Judging by the script, the clash and mental struggle between these two women was incredibly strong and interesting.”

She explained, “There are huge universes that exist both under the umbrella of the Queen and under the umbrella of the Dowager Queen. While [Kim Hae—suk] is always warm and sweet, meeting actress Kim Hae-suk as the Dowager Queen in “The Queen’s Umbrella” is news. Her acting will never get old. With many moments of admiration, I shoot, feeling grateful for meeting Kim Hae-suk.”

As a final comment for the audience, Kim Hye-soo confidently shared: “You just need to be comfortably in front of the TV just in time for the broadcast to begin. In five minutes, the Queen’s Umbrella will be yours.”