Home Entertainment Killer Class: anime “Kill or be killed”, which you need to watch 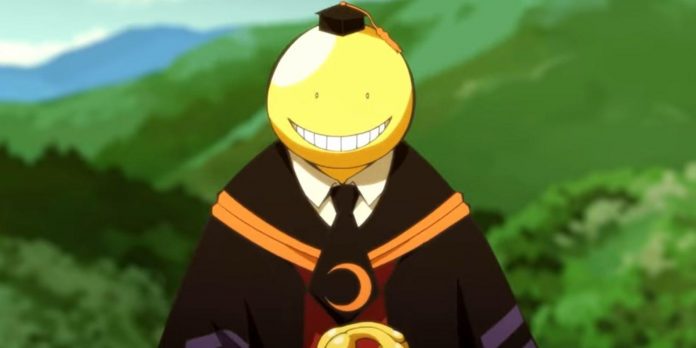 Some ingredients for a great anime include, but are not limited to; exceptional children, a nearly undefeatable enemy, plots to destroy the world, extreme training arcs, comedic relief, some fan service, life lessons, and of course great friendships. Assassination Classroom has all of these things and more. It isn’t the most complicated story, though it certainly has deeper moments, and doesn’t have the most beautiful art but it’s still definitely well worth the time to watch it. The show promises fun, death, and assassination, on each front it redefines success, and then meets both its own goal and the preconceived goals of the audience.

In Assassination Classroom class 3-E, the worst class at a high achieving junior high school, gets a new teacher. Koro Sensei is an octopus-like organism that is nigh indestructible. He has recently destroyed the majority of the moon and promises to do the same to the Earth next year unless the children can kill him first. This kicks off a few seasons’ worths of hijinks and assassination attempts, all while he helps the children improve their lives.

RELATED: Should You Watch Vampire in the Garden?

Ultimately this show is carried and driven by the characters themselves. Koro Sensei is obviously the main focus of the series and is a fascinating character. Aside from his seemingly infinite power as a “person” he is unique as well. His most endearing trait is that he never takes anything personally, from the many attempts on his life, to blatant attacks on his character. He takes everything in stride and treats every single situation as a teachable moment. While this may make him sound pedantic, the joyous joking attitude with which he approaches these concepts leaves the light-hearted and happy attitude of the series intact.

The children in class 3-E are wildly diverse as well. From the somewhat protagonist Nagisa, to his hyper-intelligent AI classmate Ritsu, no child is the same. They are all the failures of the school system, but Koro Sensei helps them discover what their own skillset is and how to develop it such that by the end of the first season they are all academically gifted, albeit some only in their one strong suit. Additionally, their extracurricular interests are wildly diverse, ranging from bug collecting and pudding making, to motorcycle racing and ramen cooking. Each of the children is taught how to embrace what makes them unique and develop their confidence by first focusing on how they can succeed.

RELATED: Cells at Work: Putting a New Spin on Slice of Life

Even the teachers in this unusual classroom are unique. Arguably Karasuma is the blandest of the three, as he is a government agent ostensibly overseeing the assassination of Koro Sensei. He checks every box you would expect, stiff, stern, but at the end of day he cares about the children. This blandness is more than made up for by the show’s unashamed acknowledgment and mockery of that fact. At one point the children even nicknamed him “Da Densest.” Irina Jelavic is the least scholarly of the three teachers and plays the role of traditional femme fatale. However, they give her character impressive depth by not only exhibiting the level of skill that her manipulations require but also by offsetting her seductive prowess with a complete inability to express her own romantic feelings.

Koro Sensei is the most complicated of all of the characters in the show, as he loves the children and considers nothing more important than their learning and opinion of him. However, he still fully intends to destroy the world if they cannot kill him. This paradox combined with his many unusual skills and octopus-like stature makes him a fascinating character in the show.

While the actual art used in this anime is not the most impressive or most complex it maintains a certain beauty that comes from technical skill and creative imagery. At one point when the children are taking their midterms, the entire test is visualized as a battlefield and the questions are fantastical beasts that the children are attempting to slay with the knowledge that they have gathered. Not only is this imagery completely relatable to anyone who has struggled with a test but it is a creative way to make something as boring as schoolwork visually engaging for the audience.

Additionally, the composition of some shots belies their simple nature and elevates them nicely. During a final showdown, two characters end up silhouetted by a spotlight that leaves sketchy shadows streaking around them. This is a simple image to render but the dramatic use of light and placement as well as the visual style chosen lend the scene exactly the weight and drama that it warranted.

The story of this show may be relatively simple: kill the teacher or the world is destroyed. But the complexity added by the children’s growing affection for their sensei and the desire to end his life themselves to gain the reward money lends their internal struggles a lot of weight. Despite the dark nature of this central theme the show manages to remain light-hearted and funny through clever writing, comedic situations, and a main villain who isn’t quite an enemy. Watching the children blossom from beaten down outcasts into talented and confident assassins on their quest to save the world and kill Koro Sensei is fun and enjoyable. This anime is a must for any avid fan of the genre.

Where to watch all Spider-Man movies online