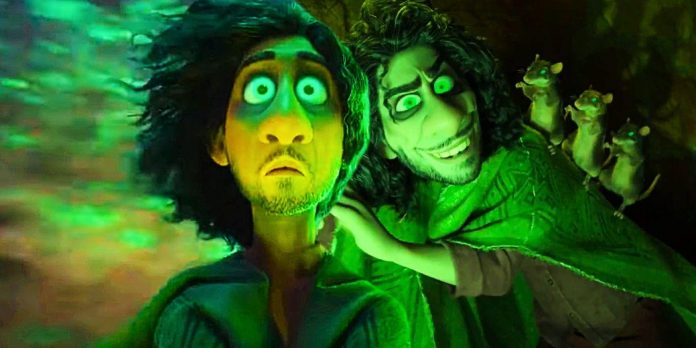 A recently released cute video shows kids singing Encanto’s song “We Don’t Talk About Bruno” on the New York subway. The action of the animated musical, which takes place in the middle of the jungle in the mountains of Colombia, is dedicated to Mirabelle Madrigal (Stephanie Beatriz), a member of a magical family living in an enchanted intelligent house. On their fifth birthday, every child from the Madrigal family receives a set of magical powers as a gift from the house to help the villagers. However, Mirabelle becomes Madrigal’s only child, not endowed with abilities, which leads to a path that will destroy the family almost forever.

Released in 2021, Encanto did not have a good box office due to the pandemic, but became a huge hit when it was later released on Disney+. However, the soundtrack to the film, written by Lin-Manuel Miranda from Hamilton, turned out to be just as popular with viewers. The album’s hit “We Don’t Talk About Bruno” eventually topped the Billboard Hot 100 and Billboard Global 200 charts, and also went double platinum.

In an adorable video recently posted on social media (via @MichaelPaulson), a group of kids riding the New York subway sing Encanto “We Don’t Talk About Bruno.” Sitting in a group in a subway car, the song plays from an invisible speaker while the children hum the melody for everyone to see. Watch the video below.

Sometimes it’s hard in New York. But there are days when you find yourself in a subway car filled with kids singing “We’re not talking about Bruno.” Today was one of those days. pic.twitter.com/4kI8U2Z3KZ

This is just the latest illustration of the widespread cultural influence of “We Don’t Talk About Bruno”, which shows how the song continues to exist a few months after the release of Encanto. Immediately after the premiere of Encanto on Disney+, the melody became the most popular Disney song in 29 years and was even performed live at the 2022 Academy Awards ceremony (despite the fact that it was not nominated for best song). Some might have thought that after the initial hype, the hype around “We Don’t Talk About Bruno” would subside by now, but, apparently, the track remains as popular as before. Since Encanto is going to be Disney’s next big franchise, it will be interesting to see if any future songs in the ownership will evoke as much from the public as “We Don’t Talk About Bruno”.

With each new musical release of Disney, its young audience seems to be captured by the most memorable melody of the film. With the original release of Frozen, “Let it Go” swept the globe and became part of pop culture, whether people wanted it or not. “We Don’t Talk About Bruno” is a fitting successor with its infectious melodies and rhythms that are still playing in the public’s mind a few months before the Encanto anniversary. It’s only a matter of time before Disney releases its next hit movie with a song that will capture the audience and not let go.

Chicago Med: Actor confirmed what was suspected of his character in...