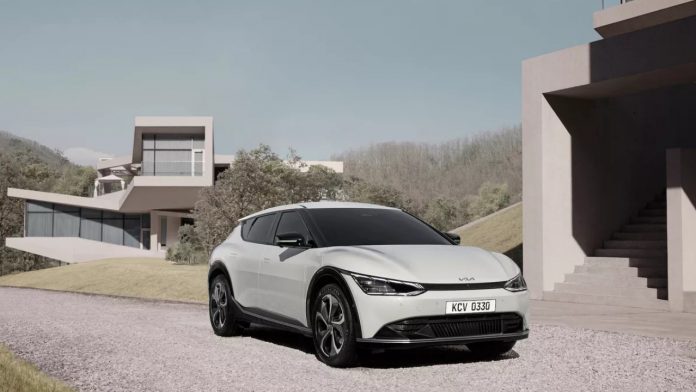 Kia presented the first real image of its new EV6 electric car after some shady teaser footage released last week. Not all details of the EV6 will be announced until an online event later this month, but the new images reveal at least what it really looks like.

The EV6 has a design inspired by the sporty crossover. The car stands out as the first vehicle to benefit from Kia’s new design philosophy, which the company calls “Opposites United” and consists of at least five pillars.

Kia design chief Karim Habib explains what that means in this video; “Brave for Nature” “Joy of Mind,” “Progressive Power”, “Technology for Life” and “Tension for Peace.”

Karim Habib explains about the EV6, which attracts attention as Kia’s first private electric car; “A showcase of human-centered, progressive design and electric power. We strongly believe that the EV6 is an interesting and relevant model for the new electric vehicle market. “With the EV6, we aimed to create a distinctive, effective design using a combination of sophisticated, high-tech features in pure and rich volumes while providing a unique space as a futuristic EV.”

Kia describes the EV6 as the first “dedicated battery-electric vehicle” as it has a new version of Niro with electric powertrains as well as gas-hybrid models. The EV6 is built around parent company Hyundai’s new E-GMP platform and is introduced as the second E-GMP vehicle to be announced.

For more technical details about the car, you’ll have to wait for the EV6 to be fully revealed. Kia has yet to reveal a date for the event, but says the event will be in March.

Suez Canal ‘stuck’ can affect ‘everything you see in stores’