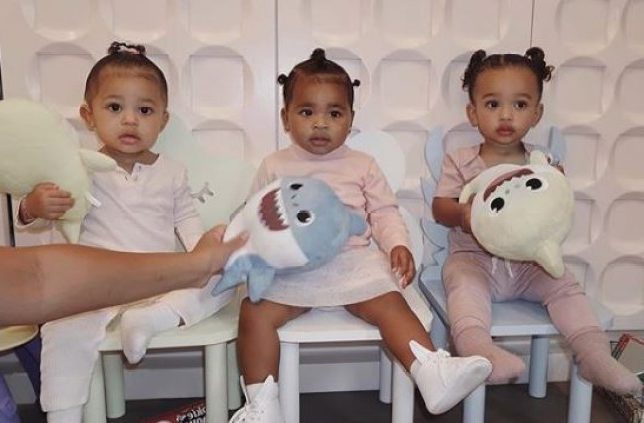 Kylie Jenner released her brand new cosmetic collection and she was inspired by her daughter, Stormi. She organized a party for the occasion and Khloé Kardashian was present with True.

Kylie Jenner wants to expand her empire a little more and she is preparing to release a new collection of cosmetics. Indeed, a few days ago, she announced the arrival of new products inspired by her daughter, Stormi. The star has always wanted to pay tribute to her child by releasing a collection in her image. She was able to count on the support of Khloé Kardashian and her other sisters.

Kylie Jenner fans will be able to discover her new collection on February 1. In the meantime, the starlet has organized a party around her collection. Sunday, January 26, she invited all her relatives and her daughter Stormi was present. The starlet organized a party with a magical theme and the children wore very beautiful dresses. Besides, Khloé Kardashian was present with True.

KHLOÉ KARDASHIAN: HER DAUGHTER PLAYS WITH STORMI AND CHICAGO!
This Sunday, Stormi was the guest of honor at Kylie Jenner’s party. Indeed, she wanted to promote her new collection with a little party. As a result, Stormi wore a beautiful pale pink princess dress. The little girl had a lot of fun and had a good time with the family. And for good reason, she found her two cousins: True, the daughter of Khloé Kardashian and Chicago, the daughter of Kim Kardashian. The three girls are almost the same age and they already get along very well. So, in videos, we can see them playing together.

Then Chicago, True and Stormi wore the same dresses for Kylie Jenner’s party. So they looked a lot alike and they were inseparable. On snapchat, Khloé Kardashian shared some videos of her daughter with her two cousins. So you can see them playing in a miniature house and they also played with paint and glitter. The girls cracked the canvas and it is clear that they had a lot of fun. As a result, Kylie’s party seems to be a success and it brought the three cousins ​​a little closer.