Home Entertainment Khloe Kardashian goes out for dinner in Malibu after giving birth to... 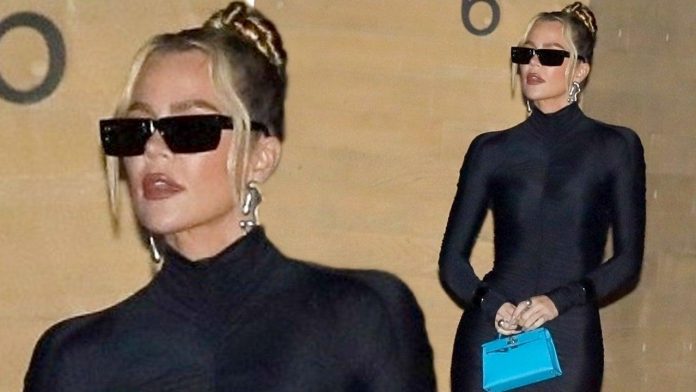 Khloe Kardashian shone in a form-fitting black dress as she left Nobu in Malibu on Monday evening. The sighting was Khloe’s first appearance since she announced on Friday that she had a son with her ex, Tristan Thompson, through a surrogate mother.

“Khloe Kardashian and Tristan Thompson welcomed their second child, a boy, as a result of surrogacy,” a source said on Friday.

Chloe, 38, and Tristan, 31, announced they were expecting their second child together in mid-July, however, a source told ET at the time that the former couple were not getting back together after their breakup due to Tristan’s paternity scandal.

“They are not together, and Chloe will have a child on a permanent basis,” the source shared, adding that “Chloe wants Tristan to be in both children’s lives as much as he wants it.”

Another source added: “Chloe and Tristan are no longer together and have not spoken since December, except for issues of co-parenting.”

The decision to have another child was made before Chloe found out that Tristan was expecting another child with Marali Nichols in December, as a representative of the founder of Good American confirmed at the time.

“We can confirm that Tru will have a sibling conceived in November,” the representative said. “Chloe is incredibly grateful to the extraordinary surrogate mother for such a wonderful blessing. We would like to ask for kindness and privacy so that Chloe can focus on her family.”

Tristan’s paternity scandal, the latest of several fraud allegations against him, played out in the first season of Hulu’s The Kardashians earlier this year.

“I feel incredibly disappointed,” Chloe said in the season one finale. “There is nothing that could be said or done that would make me feel better. All the work, energy, conversations, all those bricks that we put [on] this foundation, all in order for the tornado to pass and just demolish everything.”

PlayStation confirms that ‘God of War: Ragnarok’ is not the final...