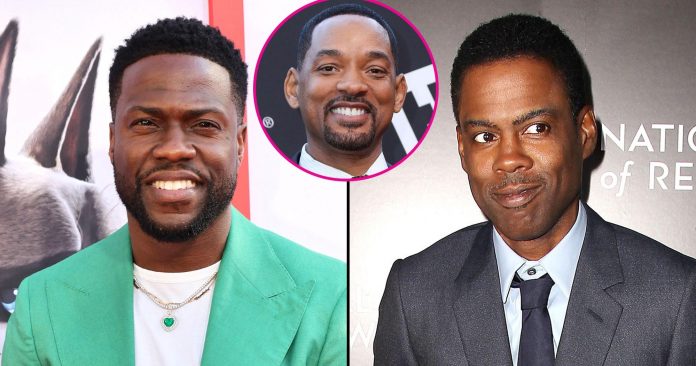 The 43-year-old actor presented 57-year-old Rock with a goat at the end of his show “Rock Heart: Only Headliners are allowed” at New York’s Madison Square Garden on Saturday, July 23, referring to the abbreviation “The Greatest of all time.” When fellow comedian Dave Chappelle, who joined the couple on stage, asked the goat’s name, Hart quickly jumped up and stated, “My name is Will Smith.”

The audience burst into laughter at the mention of Rock’s quarrel with the 53-year-old King Richard star at the 94th Annual Academy Awards ceremony in March. Smith shocked people when he hit the comedian after he joked about his wife Jada Pinkett-Smith’s shaved head. The 50-year-old Girls Trip star, who spoke candidly about her diagnosis of alopecia, rolled her eyes at the comment before her husband responded.

Although Hart later noticed on Tuesday, July 26, during his appearance on The Tonight Show with Jimmy Fallon, how his friend “almost broke down and cried” when he brought the animal on stage, one part of the trick did not go so well.

Will Smith’s controversial moments: a slap in the face, the feud of the “fresh Prince” and much more

“The goat screwed up on stage,” the “Night School” actor told host Jimmy Fallon. “It wasn’t planned either. That’s the only thing I didn’t think of. I said: “The goat will come out and spend two minutes firmly,” but instead he sat on Chris’ shoes. He destroyed Chris’ shoes. He was wearing some kind of white moon boots, and this goat got him.

The MCG event wasn’t the first time Hart had discussed the differences between his comedian friends. According to an eyewitness, the Philadelphia native began his Reality Check tour on July 9, briefly mentioning the incident between Smith and Rock during a performance. “Will Smith didn’t plan this shit,” he said during his Atlantic City show at the Hard Rock Hotel and Casino.

Rock, for his part, also briefly mentioned the incident during his performance at the PNC Bank Arts Center in Holmdel, New Jersey, on Sunday, July 24. — a native was joking, — an eyewitness exclusively told Us Weekly. During the show, Rock also referred to Smith as “Shug Smith”, possibly referring to the incarcerated CEO of Death Row Records, Shug Knight.

Later in his set, when he talked about people who are too sensitive and play the victim, Rock stated: “I’m not a victim, motherfucker,” before joking that he “shook that shit off” and got back to work. .

“Yeah, it hurts, motherfucker,” the “Fargo” actor continued. “But I shook off that shit and went to work the next day… I don’t go to the hospital because of the cuts.”