Home Entertainment Kevin Feige teases the possibility of New versions of Thor in the... 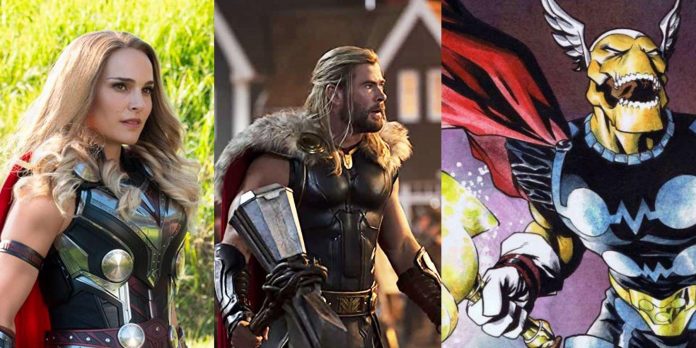 The mighty Thor Jane Foster (Natalie Portman) in the upcoming movie “Thor: Love and Thunder” may not be the only alternate version of the Thunder God to appear in the MCU. Marvel Studios President Kevin Feige hinted at the possibility of including several alternative Torus in future MCU projects.

Now that Foster owns Mjolnir and knows about the expansion of the multiverse (where several alternative versions of favorite MCU heroes are presented), the possibility of alternative Tori is very likely. Another version of Thor named Trog, the frog version of Thor, was even briefly featured in the Disney Plus series “Loki”.

link: Chris Hemsworth Reveals how long He Wants to keep playing Thor after “Love and Thunder”

According to Slash Film, Feigi believes that after “Thor: Love and Thunder” fans can see many more versions of Thor. “There are things like comics that have a lot of stories. And that’s where all our stories come from,” said the boss of Marvel Studios at the press conference “Thor: Love and Thunder.” “And if the question: “Have you told all the wonderful horror stories from comics and movies?” The answer is no. There are many of them. And I’ve always said that our interest in creating additional stories is related to the continuation of the character. It’s almost entirely about continuing the experience with the actor and being able to see-I think of all of our cast not as individual characters, but as Marvel players who can grow, evolve and change within that character.”

“And if we look at the comics as a guide, we have yet to see many other incarnations of Thor,” concluded Feigi. Since it is believed that Phase 4 or 5 of the MCU ends with the “Secret Wars” storyline, which is a multiverse comic related to other miniseries such as “Thors” (which involved several Thors from other universes, such as “Trog”, “Mighty Thor”, “Ultimate”). Universe Thor and Beta Ray Bill, who works in the Battleworld police unit called Thor Corps), it is very likely that Feiga’s comments will come true. But until that happens, fans will just have to see how “Thor: Love and Thunder” will lead the MCU further.

After the events of the climactic movie “Avengers: Finale” 2019, “Thor: Love and Thunder” Chris Hemsworth returns as the God of Thunder, while he is in search of inner peace and his true identity. However, when a new enemy appears, known as Gorr-the butcher god (Christian Bale), Thor is forced to recruit many allies to prevent the galactic threat from destroying all the gods.

In addition to showing Foster assuming the mantle of the Thunder God, the film will also tell more about the reign of Valkyrie (Tessa Thompson) as the new king of Asgard, as well as the growing dynamic between Hemsworth’s Thor and Chris Pratt’s Star Lord. The rest of the Guardians of the Galaxy group. “Thor: Love and Thunder” will also see the return of Jamie Alexander as Sif and Jeff Goldblum as the Grandmaster.